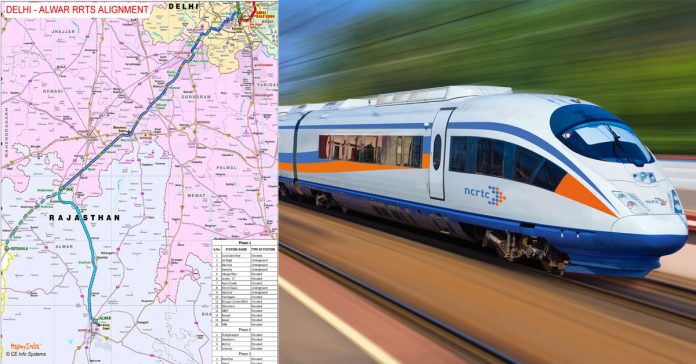 GURUGRAM (Metro Rail News): The Rajasthan government has approved the Detailed Project Report (DPR) of the Delhi-Gurugram-SNB corridor, the first phase of the Delhi-Alwar rapid rail project said an official.

The Delhi-Alwar corridor will be constructed in three phases.

The Regional Rapid Transit System is the Central government project to provide faster and alternate connectivity in the National Capital Region with an aim to check rising air pollution and decongest road traffic.

According to the official, the Haryana government had already approved the corridor in February this year.

The NCRTC Board, which is the implementing agency for the project, had approved the DPR of the 106-km-long Delhi-Guruguram-SNB corridor in December 2018.

After the approval from the NCRTC Board and the Haryana government, pre-construction work such as geo-technical investigation and mapping of underground utilities are in progress.

One of the three RRTS corridors prioritised for implementation, Delhi-Gurugram-SNB corridor is also to be implemented in three stages.

The Delhi-Gurugram-SNB corridor will be elevated for about 71 km (11 stations), the remaining 35 km (5 stations) will be constructed underground, mostly in Delhi and Gurugram.

In stage I of the Delhi-Alwar RRTS corridor, the Delhi-Gurugram-SNB Urban Complex will be constructed.

The RRTS trains will be air-conditioned and have an average speed of 100 kmph. The trains will be available at a frequency of every 5-10 minutes. There would be priority seating arrangements for people with special needs and a business class and ladies coach in every train, the detailed project report says.

Implementation of the RRTS will provide the much-needed additional public transport infrastructure to the national capital region to address issues of congestion, air pollution and catalyse balanced and sustainable regional development.