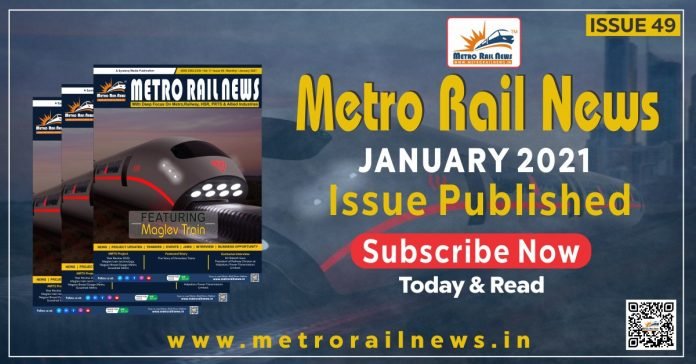 This issue of the magazine is featuring Maglev Train technology as its Cover Story.
buy cialis professional generic buynoprescriptionrxonline.net/cialis_professional.html over the counter
Although, the technology is not very new but it is indeed very new for our country as we have still not entered the elite club of the nations which have this technology.
India recently got its first driverless train operational as the PM inaugurated the first Driverless Train of the country which is now running on the magenta line of the DMRC. We are covering it as our featured story in this issue of our magazine. Our Managing Editor Mr Narendra Shah had a conversation with Mr Rakesh Gaur, President of Railway Division at Kalpataru Power Transmission Limited. The exclusive interview is going has been published in this edition.

A research paper by DR F Wingler has also been published in this issue of the magazine. Mr Wingler is a researcher based in Germany and he has mastery over the matters of the matters of Railway and Metro Sectors.
“This has been quite wonderful to publish this amazing issue of our magazine and we are looking forward to bring more such articles to you in the near future. We request you to continue supporting us”, says Mr Narendra Shah, Managing Editor and Founder of the magazine.

“The year is going to be a year of hopes and I wish all our readers a very Happy New Year”, wishes Mrs Priyanka Sahu, Director of Business Development at Symbroj Media.
With this, Symbroj Media has successfully published 49 issues of the Metro Rail News Magazine and the organisation hopes to implement new methods and technologies in this year to bring more worthy information to you.