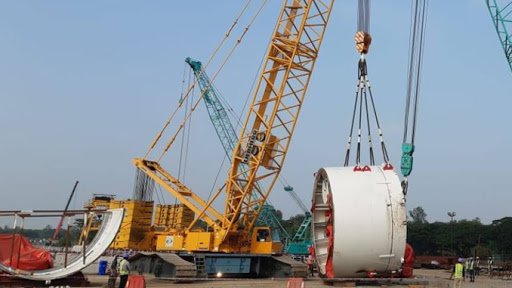 PUNE (Metro Rail News): The 1st tunnel boring machine lowered from the Agriculture College in mid-December reached the Shivajinagar site underground Metro station after digging about 1km tunnel around 20m below the ground-level on 1st March, almost 3 months before the schedule.

The Maharashtra Metro Rail Corporation Limited was requiring regular progress of about 8m. But the uniform strata served to push up the everyday tunnelling work around 12-14m and even more than on some days. The 2nd TBM lowered in the 1st week of January has also reached near the Shivajinagar station location and is supposed to progress up to the station in several days.

Shivajinagar would be the 1st underground Metro station on the Pimpri Chinchwad-Swargate route. It has started work. The Maha-Metro official said, “The progress of the tunnel work has been very better than the expectation. We were anticipating that the tunnelling work will reach up to Shivajinagar around June. But the work progressed at a faster pace mainly because of the uniform rock all along the tunnel’s alignment,” the official stated.

MahaMetro is now working on a plan for additional progress of TBMs towards Civil Court the following station on the route. The MahaMetro said by the Shivajinagar station’s work was still unfinished, it will not hamper the tunnelling work.

Many technical options were under review to ensure that the tunnelling work progressed towards Civil Court around 1km from Shivajinagar station. The underground Metro stretch by Agriculture College to Swargate is nearly distance with 5km.