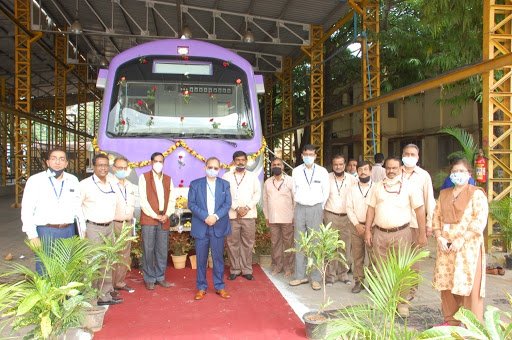 BANGALORE (Metro Rail News): Today BEML a Company under the Ministry of Defence & the premier manufacturer of Metro Cars in India, has given a green signal the last trainset for Kolkata Metro project from the Metro coach factory at Bangalore Complex.

Chairman & MD BEML Shri Deepak Kumar Hota, has flagged-off the train set in the appearance of Company Directors along with other senior officials of BEML & KMRCL.

BEML secured the contract for fourteen train sets each with 6 cars cost up to Rs 900 cr from Kolkata Metro Rail Co (KMRC).

BEML individually made the design, manufacturing activities & the delivery of the prototype train set was prepared meanwhile March 2018, that was ruled to extensive testing & trials on Kolkata Metro mainline with statutory testing by RDSO and CRS and cleared all the tests.

The revenue assistance was inaugurated through Shri Piyush Goyal, Hon’ble Minister of Railways & Commerce, in presence of Shri Babul Supriyo, Union Minister of State for Environment.

Coaches for 750V DC 3rd Rail application is designed and developed through BEML for the 1st time. Train sets operate with ATP or ATO and is interfaced with CBTC signalling to decrease headway, ensure train stopping accuracy & traveller safety.

Energy-efficient LED lights, Automatic audio-display announcement for commuters, speaking on the occasion CMD of BEML, Shri Deepak Kumar Hota, told that we are on track, as we despatched the last of the 14 train sets for KMRC East-West project. We have shown our capabilities and experience in the supply of coaches. An epitome of successful ‘Make in India’ initiative in the rolling stock sector.

Kolkata metro has joined one more feather in their already decorated cap, as it re-dedicates them to the cause of self- reliance as part of the ‘Aatma Nirbhar Bharat Abhiyan’, which is newly declared by the Hon’ble Prime Minister contributing to Nation’s pride.