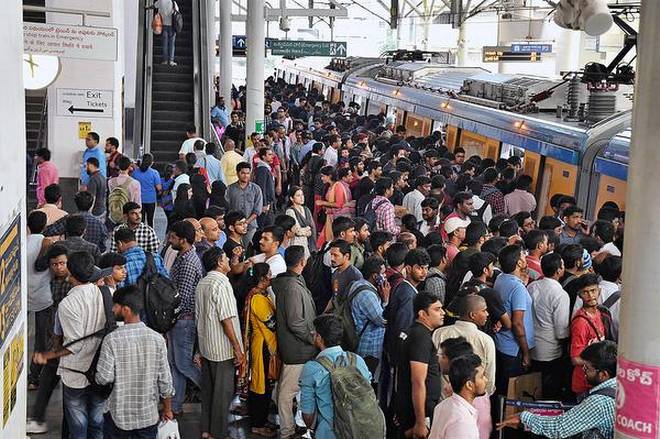 HYDERABAD (Metro Rail News) : Hyderabad Metro Rail in travel 3.2 lakh commuters as consequence of the ongoing strike by the staff and workers of the Telangana State Road Transport Corporation (TSRTC).

City buses stayed off the roads completely, except for stray suburban services run by privately engaged drivers, leaving regular commuters to find their own means of transport.

Quite a few opted for Metro Rail based on their respective locations, increasing the footfalls especially during peak hours. Lengthy queues were seen in front of the ticketing counters, and near the entry and exit points, and owing to paucity of staff, clearing of the rush was slow. Platforms too were seen crowded to the brink.

“I usually take air-conditioned bus from Dilsukhnagar up to Banjara Hills where I work, as the location does not fall on any of the Metro Rail corridors. Today, I had to board the train up to Lakdikapul and take an auto from there,” says M. Sravanthi, a software professional.

MD, HMRL, N.V.S.Reddy said the crowds were manageable and expected to stay the same for two days. Monday, however, will be a challenge if the strike continues, when additional teams and extra personnel will be mobilised.