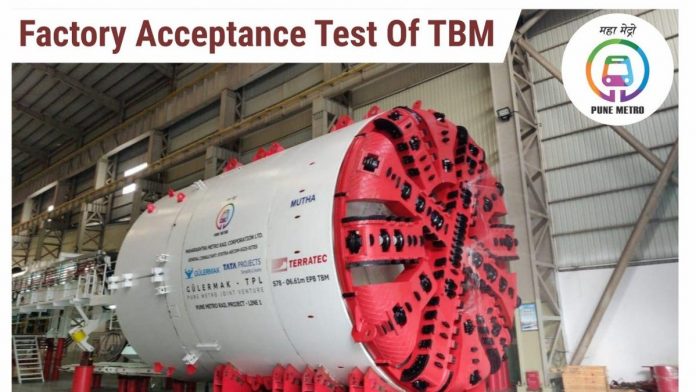 A team of MahaMetro officials visited the plant in China and carried out the factory acceptance test for the machines, which were made to specification for the project. The company will ship the machine by the end of the month.

A MahaMetro official said, “It is expected that the machine will reach Pune via Mumbai Port by the end of October”. Four machines will be introduced in phases to dig the 5km long tunnel from the College of Agriculture in Shivajinagar to Swargate. According to officials, an inspection of the next tunnel-boring machine is scheduled in a month.

MahaMetro has completed digging a vertical shaft at agriculture College to lower the machines. Work on another shaft is in progress in Swargate. The plan is to deploy two tunnel boring machines from each end, digging two tunnels — one for each direction said, officials. The underground route is part of the 16.59km Pimpri-Swargate Metro corridor.

The route will be elevated from Pimpri Chinchwad Municipal Corporation to Range Hills, after which it will go underground. The underground portion will have five stations — Shivajinagar, Civil Court, Budhwar Peth, Mandai and Swargate.