Uttar Pradesh Metro Rail Corporation Ltd. (UPMRC) has started the installation process of the Third Rail System in the Priority Corridor of the Kanpur Metro Rail Project i.e. being built between IIT & Motijhel. After a Pooja Ceremony, Metro engineers have started the installation of Third Rail System equipment at the Polytechnic Depot and the commissioning process of Power Transformers at the 220 kV Receiving Sub-Station (RSS) located in Lakhanpur.

Congratulating the Metro team on the achievement, UPMRC’s MD Shri Kumar Keshav said, “Whole Traction team is leaving no stone unturned to achieve the set target and while moving rapidly with the installation of various systems including signalling, telecom, track & electrical, we are heading towards the target of trial run on the Priority Corridor in November this year, with full positivity. Owing to the dedication of Metro engineers, UPMRC will always be remembered for its hard work and commitment. ”

—Kanpur Metro Project is going to have a 750 Volt DC Third Rail Traction System for the operations of Rolling Stocks/Metro Trains. Metro Train operations will be facilitated with the electric supply through the third rail which will be laid parallel to the Metro track.

—Third Rail system has the advantage of low maintenance as unnecessary tripping of electric supply can be avoided that usually happens because of kite-flying.

—This system also allows for maintaining a better aesthetic of the city’s infrastructure as no set-up of wires gets visible to the public. 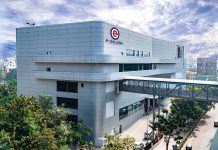 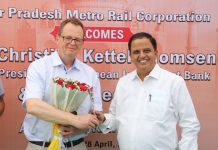