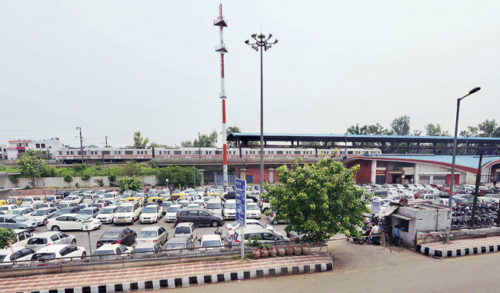 New Delhi: The Vijayawada metro rail project appears to have hit a hurdle, as the Delhi Metro Rail Corporation (DMRC) has suspended the ongoing tendering process.

The DMRC is providing technical support for the project’s execution.

While the government was hoping to finalise a contractor within a week’s time, it could be deferred due to this development. Issues with the land acquisition process and delay in obtaining clearance from the Public Investment Board (PIB) which has said that the project is not viable, were cited as reasons for the DMRC to take this decision.

DMRC had earlier cleared the technical evaluation and studied the financial bids by L&T and Afcons Infrastructure.

“We have written to the DMRC seeking to know the reasons for cancellation of the tendering process.”, said  NP Ramakrishna Reddy, Managing Director of Amaravati Metro Rail Corporation (AMRC).

The high amount quoted by L&T and Afcons was the chief reason for suspending the tendering process, according to sources. However, AMRC has denied it.

Tenders which had been called for in December 2015 became void in June the following year, after the project failed to get the necessary clearance for execution.

The duration for completion of the project is going to be affected with this latest development. Andhra CM Chandrababu Naidu had in the past directed that at least one of the two corridors should be ready by the end of 2018 but this looks unlikely.

A senior AMRC official told the newspaper that the project will get delayed but they shall launch and finish the works as soon as the process gets completed.