Just one question ‘what is the best thing about Delhi NCR?’ and 80% of the people will answer in unison as ‘the metro’. For almost every Delhiite, from someone residing here for the past many years to somebody who recently shifted, Delhi Metro is like their daily local.

Delhi Metro celebrated its 15th birthday on 25th December, 2018 and since then, it has become the heart of the Dilliwaale. Residents of Delhi have become so accustomed to the metro that now most of them dump their cars and take a metro to their offices. This changeover has happened mainly due to the sheer convenience that it provides and also because we never see a traffic jam in metro land. For a person like me who hates driving, metro is like an Angel sent from the heaven!

Especially, Delhi metro was no less than a saviour to me when I first shifted to this place as a student. With only a limited amount of pocket money to survive through my entertainment and shopping routines, I could, with my remaining meagre savings, take a daily metro from anywhere to everywhere within Delhi NCR. Plus, metro felt so much safer than any other means of transportation available here. My parents back home at least could rest in ease knowing that I’m not travelling in a crowded bus to and from any place.

I once had a good chat with a couple who stays in Bahadurgarh which is a small tehsil in Haryana, 2 km away from Delhi. The family of six, including an 85-year-old grandma, were travelling from Faridabad to Bahadurgarh in the violet line of Delhi metro. While we were talking, they confessed that this is the first time in many years that the grandma was going to see her sister in Bahadurgarh, all thanks to the extended metro line. She could not visit her for so many years because of the long and rigorous hours of bus journey that involved in it. But now, the metro is bringing the sisters together. That day, I was travelling from Faridabad to Dwarka to meet my local guardians. Metro does connect the hearts and helps keep families connected.

Professionals like me, for whom reaching on time to office is important, Delhi metro is the best available options. But I have to travel for so long that it bores me and more than often I’m irritated and think to take an alternative. But once my friend’s father told me that he had a hard time to accept a job offer in Okhla as he knew about the amount of journey which involved in commuting from Gurgaon sector 56. It was like a total wastage of time and the buses used to be over full and would stop everywhere due to heavy traffic jams. He used to catch a bus at 6:30 am to reach his job at 9 am. That day, I sat inside the metro and heaved a sigh of relief that today we have the Delhi metro for us. It is actually making my job life as comfortable as it should be.

Over the past 15 years, Delhi metro has constantly kept on extending and today it connects almost every major areas of the capital region. It is extending so rapidly that somewhere or the other, you are bound to find the signboard ‘metro construction ahead’. I once betted with one of my colleagues that there probably will be a station under construction near his house in the next one year. And lo and behold, after three months we saw the metro construction board actually being set up near his house. I won the bet!  No wonder, it is one of the longest transport systems in the world.

Today, Delhi Metro has 173 operational stations at the moment, and DMRC (Delhi Rail Metro Corporation) is all set to add 120 km in 2018. Its current network spans for an awesome 231 km following the recent opening of the Botanical Garden-Kalkaji Mandir section of the Magenta Line. This is a good news for people like me who hates to travel to Noida because of the enormous number of stations.

Well, it did not come as a surprise to me when in the year 2014 Delhi metro was recognised as the second most popular metro system globally. Yes, like with everything good comes its cons, so is the case with our Delhi metro. One of the underlying problems with the metro is that it gets over crowded during the peak hours. It sometimes gets so crowded that it becomes difficult even to breathe. This leads to uneasiness and people start blaming the metros. But again, the same people dump their vehicles and swipe their metro cards at the entrance the next day. Life in Delhi  is impossible without it.

As for me, the uber comfortable air-conditioned journey, the velocity at which the vehicle moved, the view from the window, and the rapid availability of the trains, just sold me to Delhi. I fell in love with the place. And from my own personal experience I would like to quote that “Wherever you go, you’ll find yourself missing the Delhi Metro”.

The views expressed are personal. The author can be contacted at [email protected] This article has been first published in Metro Rail News Magazine (January Edition).

If you have similar story or want to share your riding experience in metro rail in India you can write your story to [email protected] You can also share your tweets with tag @metrorailnewsin. 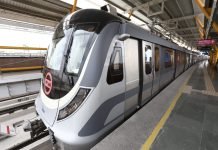 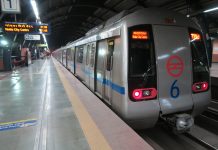