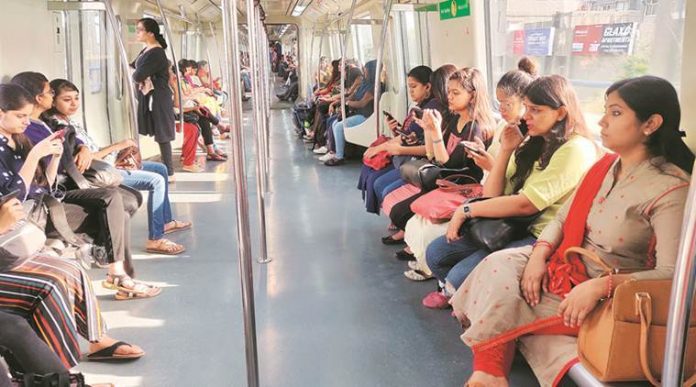 India is a country which is known for its cultural heritage, traditions and rituals since ancient times. Where no doubt, women faced a lot to get equal rights in society. They have gone through an arduous struggle to put community out of their ways of judging of male and female. However, women’s have faced a lot through the years they have treated almost non- existence. So, it is needed to empower women to make them sturdy and capable of deciding for themselves.
Women empowerment is necessary for the betterment for the country’s growth as women are playing a vital role in the country’s improvement as well as her house and its specific example is our Finance Minister Smt. Nirmala Sitharaman, who’s leading the post tremendously.

Most of the narrow-minded people feel sad when a baby girl is born and also oppose women education. They do not even get that equal respect & importance as the men in our society of, getting. Despite that they are playing a vital role of various characters in our life, sometimes mother, sometimes wife, sister and daughter.
Swami Vivekanand once said, “It is impossible to think about the welfare of the world unless the condition of women is improved. A bird can’t fly on only one wing.”People need to understand that what is the real Place and value of women in society. To improve this, Delhi’s Chief Minister, Arvind Kejriwal has announced a plan recently that women can take free rides in the Metro and buses. So that woman can come out from home and go for work and achieve all the possible levels of life.

The purpose of free public transport is there are still many families who choose to stop girls from going out for job or education because travel is costly and distant from home.  Now Women’s don’t need to think about the expenses on travel fares as Delhi starts steps towards empowering women by offering free rides in buses. It will help in the various direction so that women can fulfil their dreams, and it will also open many creative paths to them.

Further Delhi Metro Rail Corporation (DMRC) reserved the first coach in the moving direction along with 2-4 seat is reserved in rest of the coaches for women’s. It enables them to go out and live their life independently, without worrying about wearing a sleeveless shirt or having a loud talk, space is hers, and they feel safe and comfortable inside. Now Metro has become women’s favourite mode of transportation just because it has one of its reserved coach for women.
Being a woman, I feel safe while travelling in metro women’s coach because I don’t have to worry about being groped or stared by any creepy men and that’s why somehow our parents are also relaxed. Even I prefer Metro instead of a cab to travel in Metro Cities.
Apart from that Noida Metro is taking beautiful steps towards women safety and security on the International Women’s Day from 8th March, all the 21 metro stations of the Noida-greater Noida Metro stations will have sanitary pads available for free of cost. Along with that, they also provide the facility for women like baby-feeding room, diaper-changing facilities and a vanity cum changing room facility. I think all the Metro Rail operators can initiate in terms of empowering women in the country.

Besides, all the Noida Metro is also intending at having women entirely staff on these both metro stations. Except for the security personnel, a job outsourced to a private firm all other staff would be female on both metro stations. This is also very appreciating at least now women would not think of the safety in night outs as well.
Delhi Transport Corporation (DTC) is also free for women and Buses are also the safest and secure for travel options as there is a lady constable present in every bus; also it encourages women to use public transport. This free public transport for women, for at least buses, are surely allowing so many women to access opportunities which they couldn’t before.

According to research, the most powerful and winning symbolism of women leaders in the hope that they would make a significant change.  For further changes to empowering Women, banks can also reserve some percentage of a seat in the banking field for women. This may help in the growing financial state of our country.

Funding agencies like JICA, KFW, AIIB and ADB can mandate the involve more no of women employee to implementing agency of Infrastructure project with the help of MoHUA, and this will also help in women empowerment. Apart from this, let’s treat our kids on an equal scale, whether they are boys or girls at home. When parents teach their kids from their childhood that boys and girls are the same, it will help them to understand that inequality reduces in the country and When they become the part of society and act accordingly. It will also help in the country’s growth.

There are also several government schemes for women empowerment which are:

This is how the Indian government has acknowledged women issues and their contribution to the country’s economy. The government and the public as well, need to play some significant roles to allow their welfare in various sector, to ensure that the women are empowered. It may be either providing free gas for cooking, schemes related to education or enable women to leverage technology etc. Also, the time has come to an end to discrimination opposed women in the name of religion, custom or personal laws like in the case of triple talaq in our country.

The condition of women is gently improved in the last decades and started recognizing her potential. She has commenced breaking the barrier and gained a respected position in the world. As you can, in example P.V. Sindhu, Neeta Ambani, Saina Nehwal and Mamata Banerjee. There is not any single field left, which remains unconquered by Indian women, whether it is in the field of sports, entertainment, technology or politics.