Metro Rail News Managing Editor Mr. Narendra Shah conducted an email interview with Shri Anjum Parvez, MD, BMRCL, In Which Mr. Parvez shared his views on the role of metros in a high-tech city like Bangalore. He threw light on the reasons behind the delay of Namma metro and asked for all stakeholders’ proper coordination and cooperation for the project’s timely completion.

He also highlighted the other intelligent strategies to implement the projects better shortly. Moreover, he also added that the passenger boarding has increased post lockdown. Finally, he summed up by recognizing the metro as the city’s lifeline. Here are edited excerpts:

Narendra Shah (NS): Congratulations on being appointed as the new MD of Bangalore Metro Rail Corporation Limited. What are your immediate plans and goals for Namma Metro to accomplish holding the coveted position?

Anjum Parvez (AP): Immediate plans are to monitor, improve wherever necessary, and the goal is to deliver the project on the scheduled timelines.

NS: You are a senior IAS officer and have served on a number of important positions including Principal Secretary, Transport Dept. Karnataka Govt. before being transferred to this position. In what ways do you think BMRCL is going to be benefitted from your vast administrative experience especially being a principal secretary for transport department?

NS: Namma Metro is getting increasingly infamous for its project delays. What do you think is the main reason for the same? Is there any preparedness to tackle this problem creating huge cost overrun and inefficiency in terms of timely deliverance of project benefits? Apart from project delays BMRCL is also criticized for poor planning and executions. A number of project shortcomings have been reported in first phase of Namma project. What is your say in this regard? Are you going to work on it and have any plans for the rectification?

AP: Implementation of metro systems in urban built infrastructure is complex and challenging to position its full benefits, looking at the technologies adopted, land issues, environmental issues, traffic conditions, geological conditions, people’s perspective etc. Lessons learnt in the earlier phase is helping us for timely deliverance of the project through rigorous monitor on regular intervals.

NS: Metro is like a saviour for a congested city like Bangaluru. Do you agree with the statement? Do you think there is an urgent need of an inter-modal transport plan to be developed in the metropolitan city especially integrating it with all metro stations?

AP: To decongest any city, a good and reliable mass public transport systems like metro are very much required with multimodal integration along with transit oriented development for a wider external economic benefits.

NS: How friendly would be the first metro system of south India for commuters? Do you have any plans for integrating the metros with the city railway station, KSRTC and BMTC bus stations, Yeshwantpur Railway station etc.? Do you think it is a required and needful step to be complied with?

AP: Namma metro is already a part of the lifeline of the lively city, as it is commuter-friendly to all sections of the society.  Namma metro system has already integrated with Indian Railway, KSRTC and BMTC city bus stations and Yeshwantpur Railway Station etc., with good foot connectivity, feeder bus connectivity, bike hiring at stations and easy interchanges for different lines of Metro systems and planned for other phases of the project.

NS: ‘It took Namma Metro 7 Years to complete 6 Km line.’ Namma Metro is also considered to be the slowest after Kolkata Metro. The first phase also took 10 years to complete. The 72 Km Phase 2 is already delayed by more than 07 years. Our straight question to you – What is your new deadline of completion of Phase II? Are you meeting the deadline?

AP: Namma metro was the first to adopt the standard gauge and the third rail technologies for the city. Being complex in nature and to build in an already built urban infra having high traffic corridors, challenges of land acquisition, environmental issues, limited working periods for movement of men and materials, minimum inconvenience and safety of the citizens, our first section of 6.7 km of Phase-I was opened for public carriage in less than 4 ½ Years for the start of the construction. The complex geological strata for underground tunnelling and technical glitches, did create some unexpected problems for execution in time for Phase-I. Out of the 72 km of Phase-II, more than 13 km is already opened for public carriage and is operational. We have already geared up to meet the deadline of 2024 for Phase-II of the project.

AP:  DPRs are prepared after many surveys and traffic study. We do have not any poor planning, except for the ridership ship projection challenge, which again depends on many other factors, including citizens’ perspective towards public transport systems.

NS: What is your expected daily ridership for Namma Metro? Are you ready to confirm that Namma Metro would neither suffer from congestion nor face problems related to lack of ridership? Can commuters expect Namma Metro service hours to extend beyond 10 P.M?

NS: Reports say that BMRCL is also facing operating losses – around 300 crore – during last five years. What, according to you has been the major reason for the same? Do you agree that lack of one mobility card between BMTC, metro, and the railways along with lacking facilities on passenger information system, ticketing, intermodal connectivity, are a few issues to be worked upon that can help reduce losses?

AP: Pre COVID periods, Namma metro was operationally profitable. The revenues from operations were able to meet the operational cost and able to cover 70% of the interest on borrowings of phase-1. Except for a few, all metros worldwide are facing operational losses. One mobility card between public transit systems, passenger information systems, intermodal connectivity are a few issues for implementation and improvements are being worked upon. Other strategies like smart pricing strategies, discounts, advertising, co-branding, rentals, land value capture etc., are being studied for implementation. This has to be seen in a holistic manner comparing the external benefits the cities derive from these transport systems.

NS: Sir, we shall like to know about a few of your important endeavours that you recognize as challenging and consider an achievement for yourself looking at your long professional and administrative career?

AP: Construction of new metro infrastructure in a developed environment needs proper coordination and cooperation from all the stakeholders for timely completion and to obtain its external benefits for the betterment of the society.

NS: Please share your views about Metro Rail News. Any message for our readers? AP: Metro Rail News is a Collective and an Informative Magazine. Urban Rail Transport Systems should be seen as a supporter of efficient economi 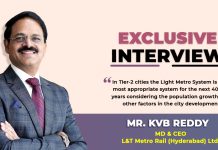