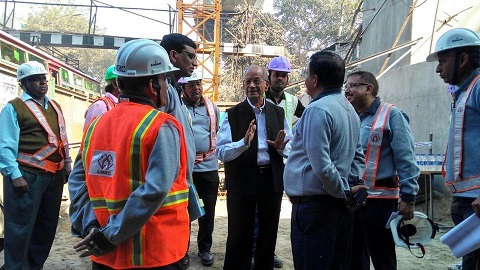 He also directed the LMRC MD to complete the 23.5-km stretch of the Metro from Amausi to Munshipulia before December 2018 so that phase 2 operations of metro for public could be started from January 2019. Earlier, the target was to complete the project by April 2019.

Sreedharan visited the LMRC office to assess the progress of trials for metro going on under RDSO’s supervision and reviewed various ongoing works of the project including the civil, electrical and mechanical works and operational and maintenance preparedness with regard to commissioning of the ‘priority corridor’ (Transport Nagar to Charbagh) of the metro project from March 26.

The principal advisor to the LMRC undertook an on-site inspection starting from the airport till Mawaiya. He was accompanied by LMRC MD Kumar Keshav and his team.

Sreedharan had a detailed review of all the works including Krishna Nagar Metro station with the Mawaiya cantilever bridge at Mawaiya railway crossing on the North-South Corridor of Lucknow Metro and expressed satisfaction over the progress of the project.

He also reviewed the progress of underground construction between Charbagh and Hazratganj.

The principal advisor also reviewed the work on the Kanpur and Varanasi metro rail projects and talked about East-West Corridor from Charbagh to Vasant Kunj, for which detailed project report (DPR) prepared earlier is being updated.