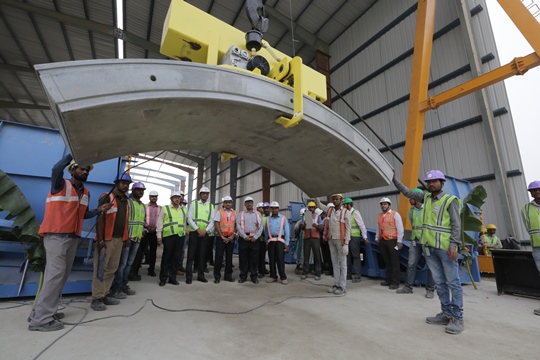 Lucknow: The Lucknow Metro Rail Corporation (LMRC) has started work of casting of concrete segment for underground section between Charbagh and Hazratganj at Casting Yard located at Sector 19, Vrindavan Yojna. These segment will be used for lining of underground tunnel planned to be constructed by Tunnel Boring Machine (TBM).

The moulds used for casting of segments have been specially imported from Korea. The average daily requirement of segments at construction stage will be 60 segments (i.e. 10 rings) as against production capacity of 72 segments (i.e. 12 rings). Sufficient reserve stock of segment will be maintained at two stacking yards located within the Casting Yard.

Speaking at the occasion, Shri Daljeet Singh, Director (Work & Infrastructure), explained that the commencement of casting of segment is a critical activity for construction of underground stretch between Charbagh and Hazratganj. He also informed that one Tunnel Boring Machine has been dispatched from Delhi, after detailed inspection and testing. This TBM will arrive in Lucknow by the end of this month. Inspection and testing of the second Tunnel Boring Machine (TBM) is also planned to be carried out at Delhi in this week.