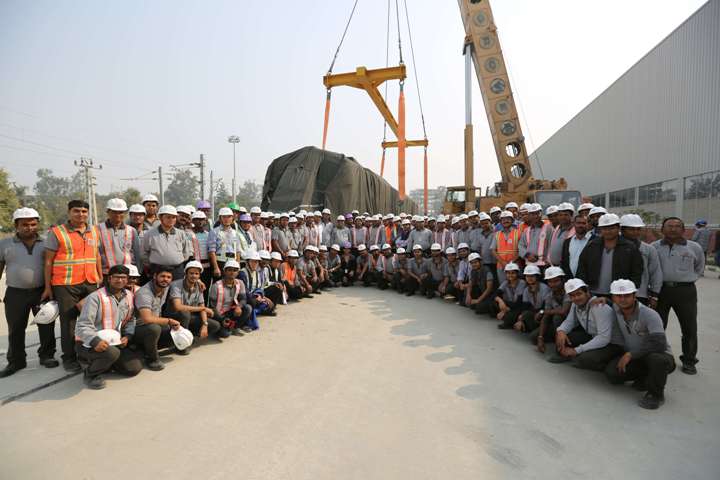 Lucknow: Lucknow Metro today unloaded the four coaches of the first train set that arrived in the Transport Nagar Depot this morning. Shri Kumar Keshav, Managing Director, other Directors and senior officers of the company were present in the Depot during this occasion to witness this historic event.

LMRC achieved a major milestone today when the company succeeded in getting the delivery of the first Metro train set in just 64 weeks after placing an order to M/s Alstom. According to the order, the contractor had to, however, supply the first train set to LMRC in 65 weeks.

On 2nd September, 2015, Lucknow Metro had awarded the contract for supply, testing & commissioning of 80 cars for 20 trainsof four car each along with train control & signaling system for Lucknow Metro Phase-1A project to French company, a consortium of ALSTOM Transport India Ltd, Bangalore & ALSTOM Transport SA, France at a cost of Rs1069.81 crores.

This is yet another milestone that has been set by Lucknow Metro Rail Corporation (LMRC) in getting the supply of the Metro train in just 64 weeks. It is, probably, the shortest known period for supply of Rolling Stock (Metro Train) to any Metro organization worldwide.

The salient design safety features of the Metro trains are proven design, crashworthiness, adequate redundancy in the system, use of fire retardant material, fire smoke detection & protection, safe passenger evacuation in emergency and the anti-climbing features of buffers.

The passenger safety features includes emergency communication facilities including talkback facility for passenger for talking to train driver directly, CCTV images inside trains to be displayed to Train Driver as well as the Centralized Security Control Room.