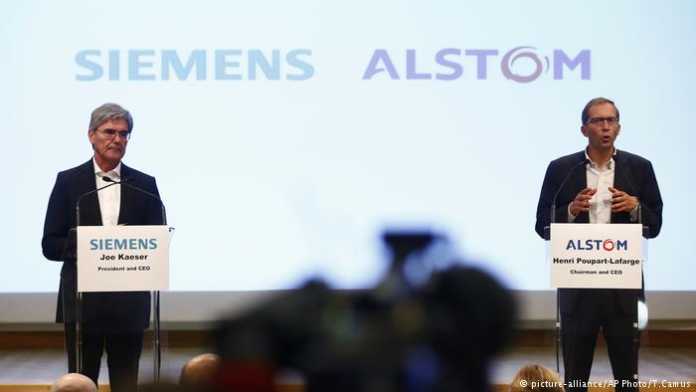 Siemens and Alstom have set the next key milestone for a champion in mobility. They have entered today into a Business Combination Agreement (BCA) regarding the proposed combination of Siemens’ mobility business, including its rail traction drive business, with Alstom. This BCA follows the Memorandum of Understanding signed on 26 September 2017 and the conclusion of the required works council information and consultation process at Alstom regarding the proposed deal. The BCA sets forth the terms and conditions agreed upon by the two companies.

Both Alstom and Siemens also announced today the proposed leadership for the future Board of Directors of Siemens Alstom. Siemens is proposing the nomination of Roland Busch, a member of the Managing Board of Siemens AG, to serve as Chairman of the combined entity’s Board of Directors. This role would be in addition to Busch’s duties at Siemens AG. Yann Delabriere, who is currently Lead Director of Alstom’s Board would be appointed as Vice-chairman of the Board of Directors as independent director. It follows the announcement made on September 26, 2017 that Henri Poupart-Lafarge will continue to serve as CEO of the combined company as well as be a member of the Board of Directors. These nominations are subject to the approval of Alstom shareholders as well as completion of the deal itself following the approval by various authorities.

“With the signing of the BCA, we have reached an important milestone on the way to building a new leader capable of tackling the challenges of tomorrow’s mobility. Both companies are working diligently and in a very good spirit to progress towards closing. These first nominations illustrate the companies’ commitment to balance in the governance of the future company,” said Henri Poupart-Lafarge, Chairman and CEO of Alstom.

“Roland Busch is the best person we could nominate for this important task,” said Joe Kaeser, President and CEO of Siemens AG. “Not only is he an expert in global mobility of many years standing. As a member of the Atos Board of Directors, he has also gained valuable experience in the integration and management of German-French industrial collaborations. Precisely this consideration was of key importance to me in his nomination to this responsible position.”

“Siemens Alstom has all the prerequisites for becoming a European success story”, said Roland Busch. “I’m honored to take on this important role for a very attractive company in a growing market. I’m looking forward to becoming part of a strong team – and in particular to working together with Yann Delabriere and continuing the very solid and close collaboration with Henri Poupart-Lafarge.”

“Yann Delabriere’s nomination as Vice-chairman recognises his expertise and achievements as Lead Director of Alstom. His presence will ensure continuity and bring to the new group his extensive industrial and financial experiences,” added Poupart-Lafarge.

“I’m very pleased to be taking part in this new chapter of Alstom’s history. This is the birth of new champion, uniquely equipped to cater to the world’s rapidly changing mobility needs. I look forward to working with such an experienced leadership team,” said Yann Delabriere.

The Board of Directors of the combined company will consist of 11 members, six of whom – including the Chairman – are to be appointed by Siemens. Four independent members and the CEO will complete the Board.

Closing is expected at the end of calendar year 2018. The transaction is subject to the approval of Alstom shareholders at the company’s Shareholders’ Meeting, planned to be held in July 2018. The transaction is also subject to approval by relevant regulatory authorities, including foreign investment clearance by the French Ministry for the Economy and Finance and approval by anti-trust authorities as well as the confirmation by the French capital market authority (AMF) that no mandatory takeover offer has to be launched by Siemens following completion of the contribution. Siemens has already initiated the internal carve-out process of its mobility business and other related businesses in order to prepare for the combination with Alstom. The new group will be headquartered in Saint-Ouen, France, and continue to be listed on the Paris stock exchange. As part of this transaction, Siemens will receive newly issued shares in the combined company representing 50 percent of the share capital of Alstom on a fully diluted basis.