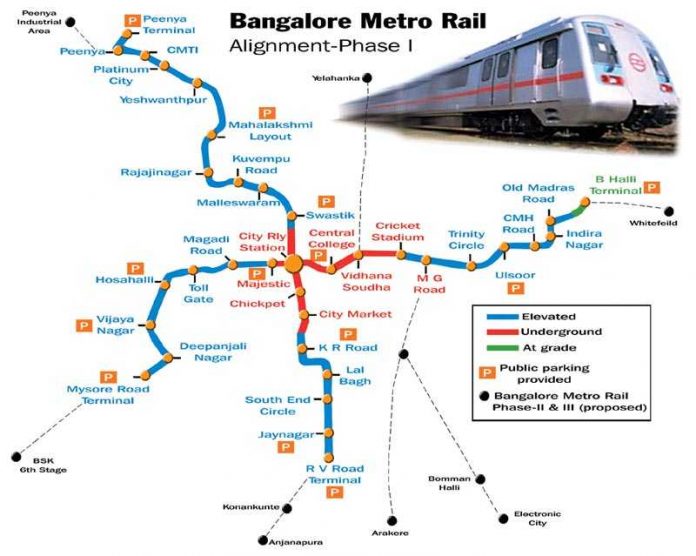 BENGALURU (Metro Rail News):  The State Government has formed a new high- power committee (HPC) of 10 IAS Officers to hasten the construction of metro projects in the city.  The committee will first meet now on June 21.

The HPC was approved between 2012 and 2019 will oversee phase II, phase II-A (KR Puram- Central Silk Board) and phase II-B (Airport link) metro projects. A High- power committee did not have a specific mandate to oversee the metro.

The cost of phase II project is over Rs. 26,000 crores. phase II was scheduled for completion by 2020-21 but it is seeing several hurdles and primarily related to land acquisition and shifting of utilities.

Managing director of Bangalore Metro rail Corporation Ajay Seth said that The process of getting government land from different departments has been simplified. The committee also has the scope of reviewing the metro project at a micro level.”

The chief secretary holds fortnightly meetings with different agencies to discuss issues and projects pertaining to Bengaluru. The new HPC was accorded administrative approval towards the end of May, and it will be held by the chief secretary.

10 IAS Officers from various agencies, including the Urban development department, finance, revenue, BBMP and the Directorate of urban land transport (DULT) will be part of the committee. They will meet once a month.

The High-Power Committee will have the instruction to sort out all the issues to metro projects, including the transfer of land, shifting of utilities and structures in the project alignment, rehabilitation of affected persons, coordinating with departments for smooth, efficient and expeditious shifting of various utilities simultaneously in one go and multimodal integration.

A senior official said,”. Be it land acquisition, shifting of utilities or even construction, we are always dependent on external factors. we, at times, have little say in the progress unless the government backs us in clearing hurdles. While the first phase was delayed for 4 years, the phase II is set to miss the 2021 deadline. It’s difficult to meet the target as the metro is being built in a living city and meeting the deadline requires cooperation from so many agencies.”

The project which completes on time has never been a forte of BMRCL ever since it was given the responsibilities to construct the 42- km phase.

A government order which was dated on may 25 stated that,” As the state government itself has to fund the cost of lands, no purpose will be served if the BMRCL is asked to pay the cost of the government land.” Different government department are entitled to give land free of cost to the Namma Metro.