The stretch of 12.64 km is part of the Botanical Garden-Janakpuri West corridor of 38.23 km under the Phase III of the Metro expansion plans, and will be inaugurated by Prime Minister Narendra Modi on the eve of this Christmas Day i.e. December 25.

December 25 has been a significant date for the Delhi Metro Rail Corporation (DMRC) as its first line, the Red Line from Dilshad Garden to Rithala, was started for the public on Christmas day of 2002. The line was marked by then Shri Atal Bihari Vajpayee (then Prime Minister of India).
Advertisement

With the opening of the new line, Noida residents will save at least 45 minutes of daily travel when traveling to South Delhi.

Kalkaji Mandir is underground and the others are elevated. The route will serve two important educational institutions: Jamia Millia Islamia and Amity University.

The Jardín Botánico subway station will be the first exchange station outside of Delhi and, since both the Botanical Garden and Kalkaji Mandir are exchange stations, there will be a significant reduction in travel time between the Blue and Violet Lines.

Very illuminated and with videos that will guide you on the routes, the Magenta line promises comfort and convenience for passengers. The trains will have Wi-Fi, USB ports along with charging points, LED and LCD screens and backrest near the wheelchair area. The seats on the new trains will be red, pink, orange and blue to give a sense of life.

This will be the first Metro line with trains without driver, the first in the country. Initially, trains on this route will run with drivers for 2-3 years.

The stretch will also be the first after the Airport Express line has screen doors on the Metro platforms. Post this, every new line launched in Phase III will have the same feature.

In fact, Delhi Metro Rail Corporation (DMRC) has decided to include platform screen doors in all stations that will be built in Phase IV as well.

The sources said that the line was ready since the Commissioner for the Safety of the Metro Railroad (CMRS), after visiting the section of November 13-15, gave the green light for its opening with a list of some observations. DMRC took about one month to clear the objections listed by the CMRS.

A senior official of the Ministry of Housing and Urban Affairs of the Cabinet in condition of anonymity, said that the delay in opening the Magenta Line despite the approval of the CMRS was due to the fact that the authorities were solving logistical problems related to its inauguration. “It is absurd to link the opening of the line with the results of the Gujarat elections, once a line is declared ready to open, there are a number of logistical problems that must be addressed before they can be opened to the public”., added by the official.

This section was expected to be opened in last year. 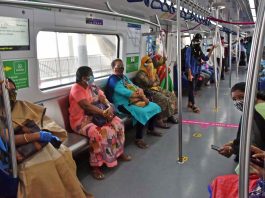 The daily ridership of the Namma Metro has decreased by 1...

UPMRC MD Mr. Kumar Keshav has been given a four-month extension...