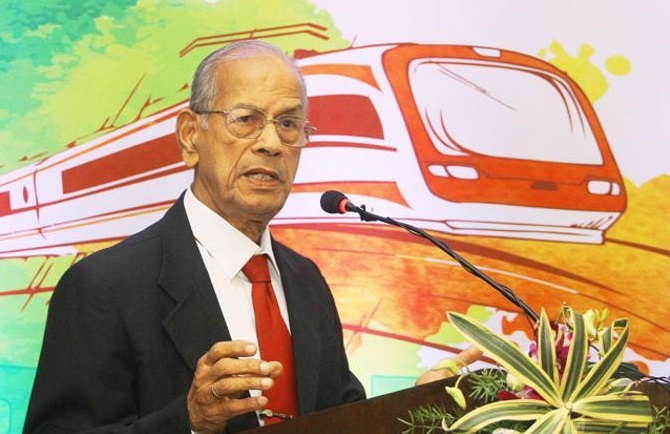 Popularly known as Metroman, Dr. E Sreedharan had joined the Indian Railways Engineering Service (IRES) as an assistant engineer in 1954, and retired from the organization after thirty-six years of service in 1990. He founded Konkan Rail Corporation Limited (KRCL), spending seven years there, after which he became the managing director of DMRC (Delhi Metro Rail Corporation) in 1997.

When he retired from DMRC in December 2011, he was seventy-nine years of age. At that time, having spent fifty-seven years in public service, all he wanted was a quiet life in retirement. However, he was given the task of overseeing the Kochi Metro, the monorails in Kozhikode and Thiruvananthapuram, and the construction of the south-west speed-rail track right away. He took on these new challenges at eighty-one with the same earnestness that he had displayed six decades earlier when he walked into the Indian Railways, re-embarking on a work life of non-stop travel, moving between Ponnani, Kochi, Thiruvananthapuram, New Delhi and Bengaluru (also Bangalore).

The projects Sreedharan undertook to deliver, from the Pampan Bridge to the Kochi Metro, involved about Rs10 lakh crore in investments. Not one of them was sullied by even a hint of corruption. One saw tens of lakhs of rupees change hands even in janitorial contracts for the Commonwealth Games. It was as part of the city’s preparations for the same event that the Delhi Metro’s second phase was completed; it needed a whopping Rs24,000 crore. Sreedharan oversaw the task. When the Commonwealth Games corruption scandal snared even central ministers in jail, the Delhi Metro was the only project that emerged without blemish.

Sreedharan left the Indian Railways with the wealth of three and a half decades of accomplishments in civil engineering, having finished enormous missions. The construction and renovation of all major rail lines, and their doubling, were completed during his time with the railways, and he played a large part in it. But Sreedharan came to the world’s notice after his reconstruction of the Pampan Bridge in record time after storms and floods had struck it down. He boarded a Rameswaram-bound train in 1964 with a mission to reconstruct the bridge, which used to be known as a British engineering marvel. He was only thirty-one.

What Sreedharan termed as a triumph of engineering was completed in only forty-six days—a mere half of the estimated time. That night, when the then railway minister SK Patil announced that the project would be completed in a week’s time, Sreedharan had already installed the last girder in the bridge to flag off the first train towards the shores of Rameswaram.

Sreedharan’s next major mission was the design of the Calcutta Metro (now Kolkata Metro), which was to become the model for modern national public transportation systems in India. The Indian Railways ventured into the project with minimal knowhow or understanding of metro rail systems, as did Sreedharan. He accepted the daunting tasks of designing and planning the project. Paying for himself, he spent four days studying the Tokyo Metro lines; the result of this was a world-class metro rail system in Kolkata that runs entirely underground.

As for Sreedharan, his appetite to learn did not end with this engineering feat. Although he was not responsible for the lapses in the build and delivery processes at Kolkata, he was resolute in making sure they never happened again in his future enterprises.

He could have been successful anywhere, and not just with railway-related projects.

His stint as chairman and managing director of Cochin Shipyard illustrated this. Never did that institution have such an exceptional leader. He was there for just a year, and had to overcome the malaise of endemic negativity among the trade unions in bringing out the yard’s first-ever ship, Rani Padmini. It was a remarkable success and a proud moment for the country.

Along the way, he publicly exposed the unholy nexus between the bureaucrats and administrators who were the actual beneficiaries of commissions in crores of rupees from foreign purchases. This singular act displayed the stamp of distinction that was Sreedharan’s, and was an early sign of the professionalism and tenacity that he displayed throughout his career.

The Konkan project, an epic in the history of the Indian Railways, followed next. The scale and range of challenges Sreedharan had to overcome in order to build 760 kilometres of track, starting from Mangalore in the south to the town of Roha in Maharashtra in the west, were formidable, to say the least. The track would run between the restless Arabian Sea and the Western Ghats that stood tall facing the sea. The project, which had wilted away in the archives after having been written off as an impossible task since the time of the British, took only seven years and three months to complete under Sreedharan’s leadership.

He systematically and doggedly wiped out every single obstacle in its path. It was the treacherous terrain, and not money for the gigantic construction, that posed the challenge. Not only did the tracks run through the difficult terrains of four states, the stretch had to negotiate the more difficult task of handling four incompatible and paradoxical political systems. With his inimitable skills of diplomacy, Sreedharan broke through all resistance—geological and political—stringing along everyone in laying out the engineering miracle.

Having spent four decades on official duty by the time the Konkan mission was done, Sreedharan was preparing to put his feet up. By then, DMRC was established for the Delhi Metro project. Sreedharan, originally on the committee appointed to scout for a managing director, found himself appointed for the job. In the initial period, he shouldered both responsibilities—the Konkan Railway and the Delhi Metro—shuttling between Mumbai and Delhi without respite.

What amazed the people of Delhi was not just the construction of the most modern metro line, but the attention taken every step of the way to make sure that the everyday life of the citizens was not affected. The mission progressed at great speed and, notably, without impacting the environment. In just two years and nine months, the first phase of the Delhi Metro was completed, three months earlier than originally scheduled, and without cost overruns of even a single rupee above the estimated Rs10,500 crore.

The project’s 124-kilometre second phase, projected to cost Rs24,000 crore and estimated to lose Rs2.5 crore every single day of delay, took only four and a half years to commission. In the annals of metro development projects, it was indeed a world record.

Let us reflect for a minute to put all these achievements in perspective: they happened in a nation where building a simple, functional bridge or a narrow road in a panchayat generally costs tens of lakhs of rupees and happens at such an excruciatingly slow pace as to be of little real benefit.