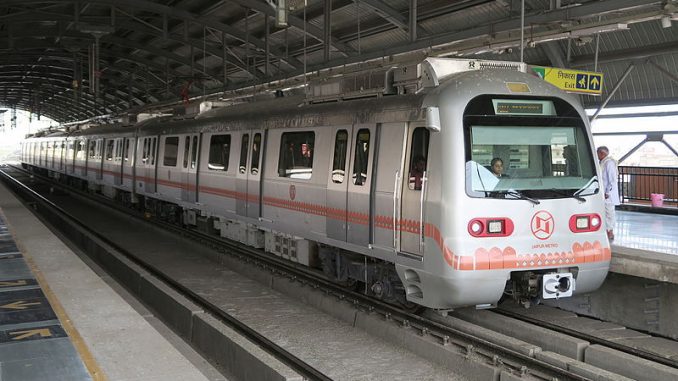 Jaipur, Metro Rail News: The Government of Rajasthan, has decided to extend underground corridor of Jaipur Metro Phase (I) B up to Ramganj Chaupar in the Walled City area, increasing its total length by nearly 600 meters.

Currently, Jaipur Metro Rail Corporation (JMRC) is constructing an underground of Jaipur Metro Phase-IB corridor which has a length of 2.4km from Chandpole to Badi Chaupar. As per the information, the decision was taken in a high-powered committee, headed & chaired by chief secretary D B Gupta.

After this, the total length of the corridor would be approximately 3 km after it is extended from Badi Chaupar to Ramganj. The estimated cost Rs 280 crore expenditure to construct this additional underground corridor.

Mr. Gupta, Cheif secretary Said “The state government will be spending Rs 160 crore to extend this corridor. It already has Rs 120 crore in the account, which was taken as loan from Asian Development Bank (ADB) and not been so far,”.

The extension proposal will be sent in the cabinet for the final nod. It was also decided that the state government will fund the Jaipur Metro Phase II project in same meeting, proposed between (Ambabari to Sitapura) and not invite private players to develop this project on Public Private and Partnership (PPP) mode.

“The state will seek financial assistance from Centre to construct the Phase-II corridor. Both Centre and state would invest 50- 50% to develop the project,” he added.

After the change in government, launching metro phase-II has revived as metro was the ambitious project of chief minister Ashok Gehlot in his previous tenure. The JMRC prepared its first DPR in 2011 during the Congress government’s tenure. However, the project has no development even after seven years.

After terminating the contract of French company EGIS Rail SA, the corporation has decided to initiate the process of reviewing a revised DPR.

JMRC official said “The previous firm has approached the court after its contract was terminated. Now, we have decided to initiate the process to give work to DMRC which had earlier prepared the DPR of Jaipur metro phase-I,”.

In 2014 the cost of the project estimated was nearly Rs 10,000 crore to construct nearly 24-km-long corridor. the (DMRC) had proposed a total 24- km long route that includes 10-km underground and 14-km elevated corridor for phase-II. The JMRC is expecting that project cost will increase from 5% to 10%, based on the market price