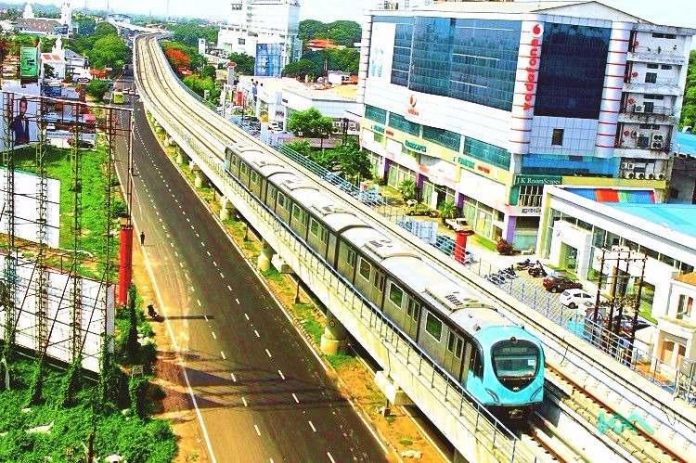 KOCHI (Metro Rail News): The state government has provided Kochi Metro with a green signal for extension of Kochi Metro to Tripunithura Railway Station. With the approval government cleared all the doubts that were raised for the extension in the wake of last year’s floods.

Due to the floods that occurred last year in Kerala the Tripunithura Municipality authorities requested the Metro agency to revise the Metro route to Tripunithura through the proposed road and bus depot planned beside Tripunithura railway station. In 2017 The Kochi Metro Rail Ltd (KMRL) prepared the DPR (detailed project report) for the extension of Metro services from S N Junction to Tripunithura Terminal. The DPR had proposed 1.2-km viaduct and one station- Tripunithura terminal. After working on the request, the DPR was revised and submitted to the government with an estimated cost of Rs 356 crore.

Official stated that “Now, all those doubts have been cleared. The Cabinet has approved the extension of Kochi metro from S N Junction to Railway station via bus depot. This is really a great moment for the residents of Tripunithura. The extension will cost Rs 356 crore and the work, once launched, will be completed in two years,”

It's almost here! With Kochi Metro's construction work almost nearing completion, Kochi readies for the much-awaited facelift. Pictured here is Jos Junction in all its pride and glory. #kochimetro pic.twitter.com/cywImbpLRr

As soon as the first phase of work until Petta is completed the contract between KMRL and the Delhi Metro Rail Corporation (DMRC) will end. The KMRL will directly execute the remaining work.