According to reports Indian Transport Minister Mr Nitin Gadkari has revealed that as part of its efforts to provide efficient transportation system in our cities the government will soon launch the personal rapid transport project which is also popularly known as Metrino in the National Capital Region (NCR).The Transport Minister disclosed this on Sunday. Traffic congestion and pollution are the two main things which have been plaguing this city for a long time. With the introduction of these Metrinos, the situation might improve for the better. Every Pod is enabled to take five passengers at a time. In a report published in the Metro Rail News in March this year, a senior NHAI official said that this project does not need the forest and environmental clearance.

This pilot project with a cost of Rs 800 crore aims to let passengers use India’s first driverless pods. Their pods will be suspended on ropeway and will initially cover a stretch of 12.3 km. The areas which will fall under this pilot project are Delhi-Haryana border to Badshapur via Rajiv Chowk in Delhi and IFFCO Chowk and Sohna Road in Gurgaon. 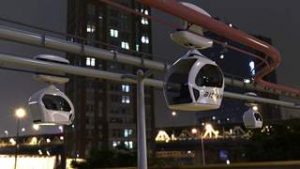 According to the transport Minister four initial tenders have been received for this project and they intend to invite financial bids to implement this project soon.

Mr Gadkari said that this pilot project will be implemented under NHAI (National Highways Authority of India).He said that he had a recent meeting with the Urban Development Minister and in the meeting, there was a discussion on whether to implemented this project under Tramways Act or the NHAI Act. It was eventually decided that the pilot project will be executed under NHAI act.

Transport Ministry officials have said that initially there will be 13 stations. The official further added that four global companies have been successful for the technical bids. This includes a company from London which has done work in this context in the UK’s busiest airport Heathrow. One company each from US and UAE have also been successful for the bids. A Polish company has also qualified in the technical bids.

The Metrino is considered to be extremely environment-friendly as it will run on electricity. The pods will be suspended 5-10 meters above the ground.

The Prime Minister of India and the Union Cabinet was given a presentation of this ambitious project a few months ago.

The Metrinos are also considered cost effective as compared to the Metros. According to news reports, the capital cost of a Metrino per Km is 50 crore whereas the Metros cost much higher at 250 crores per km.

In the coming times, it will be interesting to see how the citizens of the metro respond to this latest form of transport and if this new project by the government to decongest the capital roads will be successful.