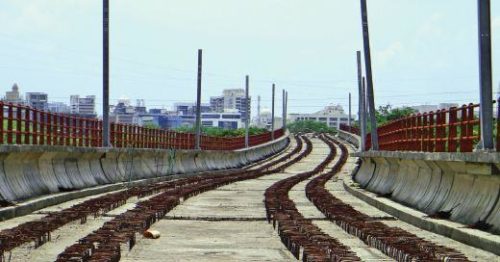 Mumbai: The Navi Mumbai Metro Rail (NMMR) project has been considerably delayed past its original deadlines. These delays have already pushed up the cost. And they could lead to inconsistency in construction, deterioration of material, and poor quality control, experts say.

Initially expected to be commissioned in December 2014, third extension of deadline has pushed project cost up from Rs. 1,985 crore to Rs. 3,000 crore.

The state government approved a mass rapid transit system in Navi Mumbai in September 2010 with the City & Industrial Development Corporation (CIDCO), as the administration implementing agency. The 23.40-km Line 1 — Belapur–Taloja–Pendhar–Khandeshwar–Navi Mumbai International Airport — was to be implemented in three phases. On May 1, 2011, then-Chief Minister Prithviraj Chavan performed the ground-breaking ceremony for Phase I, Belapur–Pendhar, an 11.10-kms stretch with 11 stations costing Rs. 1,985 crore. But the project missed its December 2014 deadline due to technical delays, most notably a change in the coach size — from a width of 2.9m to 3.2m so that the NMMR could link with the Mumbai Metro in future — and then missed it extended deadline of January 2016. Now, the Navi Mumbai Metro is expected to make its first run only in December 2017. Meanwhile, the project cost, estimated at Rs. 1,985 crore in 2010, rose to Rs. 2,400 crore in 2014 and has now reached around Rs. 3,000 crore.

Talking to media on condition of anonymity, an engineer involved in the project said that three critical issues had stalled the work: “The first hurdle was the Metro line passing over the Diva-Panvel line of the Central Railway; the CR is yet to approve the construction of a 100-metre steel bridge over the railway lines near Taloja. Secondly, permissions from the concerned authorities are needed to extend the height of a high-tension wire between Belapur and Kharghar to let the Metro Rail pass below. Also slow work by contractors who have been given the job to build Metro stations have compounded in the delay.”

The delays alarm experts, who point to the flyover collapse in Kolkata five months ago; that bridge had been under construction for seven years, with inordinate delays, inconsistency in construction material, lack of quality checks and improper project execution cited as the main reasons for the collapse.

“Any major project should be completed in a time-bound frame so that there are no inconsistencies in the construction material like cement,” says civil engineer Johnson Joseph. “When project execution is delayed for a prolonged period, the strength of the cement used in the initial stages may defer from the one used much later. Even if there is a difference in the consistency of the cement compounds of lime, silica, alumina, iron and gypsum, it could affect the strength of the structure to an extent. Also, the steel rods or bars used to reinforce concrete rust when left exposed for a long period. And, if proper chemical treatment is not done to these exposed rods, it could further weaken the structure.”

Senior officials at CIDCO say that after several rejections and changes, the design approval for the bridge over the railway tracks process is now in its final stage. “Almost 65 percent work of the 11.10 km Phase 1 of the Metro project has been completed — that is, 95 per cent of viaducts, 60 per cent of station work, 75 percent of depot workshop —while installation of signboards, telecommunication systems, automatic fare collection system, etc., is going on. Some equipment is in the delivery stage, with the first Metro coaches expected in December this year,” said the CIDCO official. “Permissions for clearing the remaining hurdles are underway, and all the balance work will be completed in the stipulated time. The Metro will not miss its 2017 deadline. The contractors who missed the deadline have been fined. But, I am unable to tell you the exact amount.”

When asked about the experts’ opinion that inordinate delays could pose risks to the project, the CIDCO engineer said, “We are taking adequate measures by giving proper chemical treatment to the exposed metal portions of the project, and the life span of the Metro Project will be more than 100 years.”