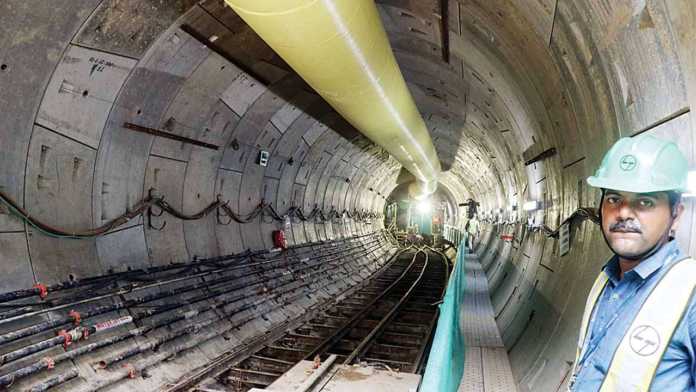 Ahmedabad: Work on Ahmedabad metro which is in full swing was halted after the sinkhole appeared. Underground construction work is going when the sinkhole appeared and authorities were forced to stop the on-going work. Around 176 people residing in the nearby area were relocated to safer zone as a precaution.

Currently, underground tunneling construction work is going on for Ahmedabad Metro rail. Apparently, the metro officials spotted a sinkhole near the site. The authorities as a precautionary measure had to stop work and evacuate 176 people residing in Gomtipur.

In the last few days, residents were relocated to safer areas. This sinkhole came to surface post heavy rainfall. The sinkhole already poses a threat to residential buildings located in the vicinity.

A senior official from Metro-link Express for Gandhinagar and Ahmedabad (MEGA) – the company building the metro project informed that have evacuated 27 families. The official added that in last couple of days they have relocated 176 residents.

The houses located in this area are about 100-150 meters from the underground segment that starts from the Apparel Park on the East-West corridor of the project.

A senior official while interacting with Indian Express explained, “The tunnel begins at this place and so it is shallow. In other words, the tunnel which is usually at a depth of 15 meters is at a depth of 8-10 meters from the surface. One of the two tunnels has already been dug for 500 meters and work on the second one was at 150 meters when the incident occurred yesterday (Friday).

The officer also authorities are trying their level best to fill up the sinkhole.

Ahmedabad Municipal Corporation (AMC) has already declared the buildings in the area as dangerous. The residents were notified that the homes are in bad conditions owing to lack of repair.

A metro official shared that when the tunneling work going on, they evacuated over 15 families. This was done to take necessary precautions due to heavy rainfall.

An alternative accommodation is arranged for those who have been those evacuated.

MEGA officials on Saturday had paused tunneling work. They first carried out a physical inspection of the structures located near the sinkhole.

As per the design plan, the 6.83 kilometer-long underground section is the only underground route that lies on the 20.5 kilometers of the East-West corridor of the Phase – I of Ahmedabad metro rail project.