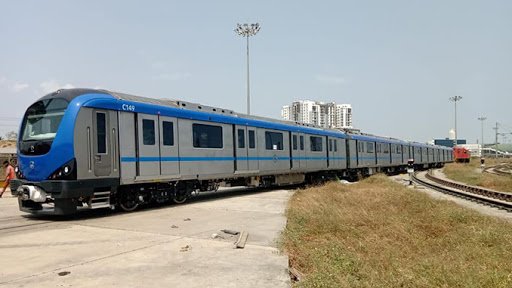 CHENNAI (Metro Rail News): The ten new train sets for the line reached Chennai Metro Rail depot at Koyembedu in the early morning of Thursday. Even as the nine-kilometre metro corridor in North Chennai is preparing for a June 2020 opening. In a release, Chennai Metro Rail Limited released the new trainsets will now a series of tests as speed (slow and high) routine tests at the depot and the mainline before they are deployed for commuters services.

The trains would be run on the nine km long phase-1 extension line between Washermenpet-Wimco Nagar. The trainsets were being manufactured at Alstom’s factory in Sri City, Andhra Pradesh. The expense of the supply is around Rs 200 cr with loan assistance from JICA.
buy propecia online gaetzpharmacy.com/propecia.html no prescription

The manufacturing of the trainsets had started in Feb 2019. Trains have gone through many tests and inspections like car body dimensional checks, static routine traction, water tightness check and brake tests. that was witnessed and confirmed by CMRL. The 1st metro train was given on 19 October 2019.

The phase-1 of CMRL Project comprising a distance of 45 km has been fully operational by Feb 10, 2019. The Phase-1 Extension project from Washermenpet-Thiruvottriyur/Wimco Nagar is being implemented at an evaluated completion expense of Rs 3,770 cr, declared the release.

CMRL awarded the contract in March 2018 to a consortium of Alstom Transport, France and Alstom Transport India Ltd for the supply of ten trainsets for the phase-1 extension project.