BANGALORE (Metro Rail News): Threats about a potential public safety hazard arises after photos appeared of a possible crack in a Namma metro pillar in Kengeri-Challaghatta Metro section off NICE Road. However, the metro line is under construction and is proposed to start operating by 2021. The matter came into limelight after pictures of a metal structure of a viaduct resting on a pillar near the Rajarajeshwari Hospital on the Bengaluru-Mysuru highway went viral on social media networks.

“This is not a crack. Our experts are looking into the issue and we will take corrective action and ensure that this does not cause any harm to the public,” a senior official of the Bangaluru metro was quoted by news agencies.

“Whenever there is a situation where there is doubt over the stability of the structure, we have to do an oscillation test. During normal train movement a lot of vibrations will take place due to its speed, so we have to ensure that this structure can sustain that” told a senior official.

The metro operations were shut for  four days when similar cracks developed in the metro pillar structure near Trinity Metro Station. This had hampered the transport system of Bangaluru for four consecutive days in the year 2018 and later the pillar was repaired to resume metro operations.

In 2012, the same spot had developed cracks just one year after it was built. Officials however denied the charges and told that experts were looking into the matter to take corrective measures. 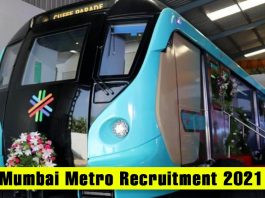 Mumbai Metro Recruitment 2021: Apply for the post of Deputy Engineer... Gujarat Metro Recruitment 2021: Apply for various posts in Ahmedabad and...