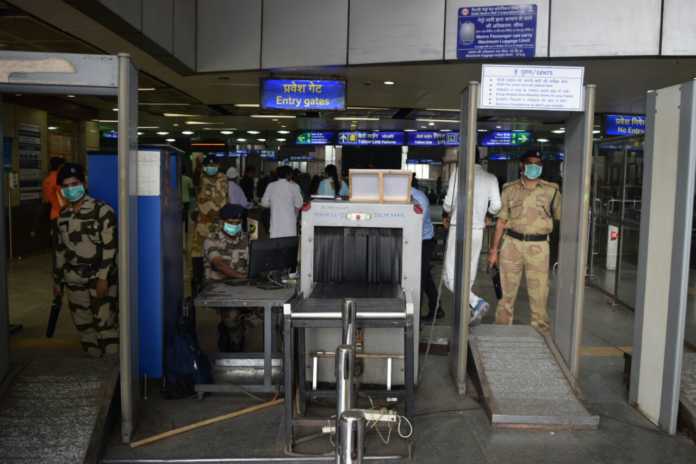 New Delhi: The IGI Airport and Delhi metro’s security measures stepped up as with the induction of over 600 new fresh CISF personnel.

The officials said that commuters are being thoroughly frisked in view of the heightened vigil in the run-up to the Independence Day on August 15. They said while passengers in the Delhi Metro are being twice frisked before entering the Delhi Metro stations, additional CISF quick reaction teams (QRTs) and flying squads have been employed at select stations that witness a heavy footfall or are important from the security point of view.

The Central Industrial Security Force, that is tasked to secure over 210 stations of the metro in the national capital region, has enhanced the number of security personnel in the network to keep a better eye on the people and their luggage.

Passengers getting in at a number of airports are being frisked twice, first manually and later with a hand-held metal detector he added up that instructions have been issued to the personnel to render the job scrupulously but without taking much time.

A senior official said that about 500 CISF personnel have been deployed additionally in the Delhi Metro network as part of the stepped-up security measures in the wake of Independence Day celebration on 15th August.

Raghubir Lal CISF metro security chief Deputy Inspector General (DIG) told PTI that they have already held meetings with various stakeholders like the Delhi Police, metro authorities and other as parts of the drill undertaken to fortify security before August 15.

The DIG said that a new control room, armed with over 5,000 CCTVs and other smart tools, has recently been commissioned for the CISF and it will help us in better monitoring operations at the station under its surveillance cover.

Another official said on the condition of anonymity that on the Special teams of mufti-wearing intelligence and passenger profiling sleuths have been deployed at various stations and they have been asked to keep an eye on a new station by continuously moving between them.

Similar measures have been deployed at the Indira Gandhi International (IGI) airport and passengers are randomly being made to undertake a second frisking, called the secondary ladder point check (SLPC).

About 100-150 additional Central Industrial Security Force (CISF) personnel have been deployed at the airport and passengers may have to undergo a rigorous check of themselves and their luggage in certain cases.

The official added that vigil has also been stepped and a close eye is being kept at all category of vehicles entering the airport area.

Various events, including the main function at Red Fort where Prime Minister Narendra Modi will unfurl the national flag, will be held in the national capital and the NCR to mark the 72nd Independence Day on August 15, 2018.