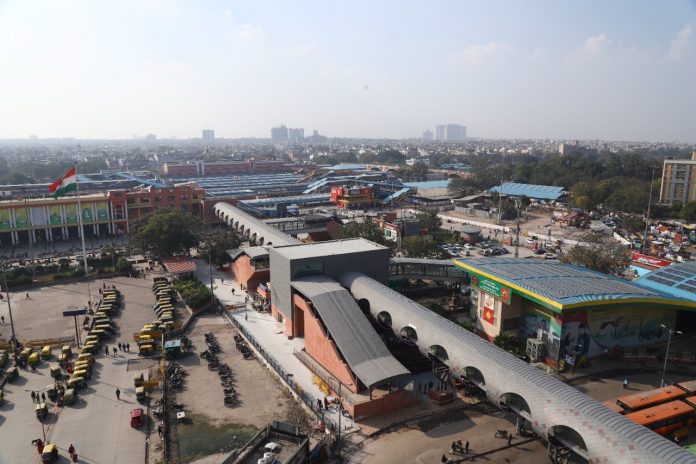 DELHI (Metro Rail News): The Delhi Metro Rail Corporation (DMRC) said on Feb 11, 2022, that a skywalk will be opened to the public soon to provide seamless connectivity between the New Delhi train station and the nearby metro station.

DMRC tweeted, “In a step towards providing seamless connectivity between New Delhi Railway station & adjacent New Delhi Metro station on Yellow & Airport Express Lines, a dedicated skywalk, constructed by DMRC in association with Northern Railways, is all set to be opened for public very soon.” New Delhi metro station is located on the Yellow Line of the network.

Officials said the newly constructed Skywalk is an extension of the railway station’s foot over bridge (FOB) and connects the station’s Ajmeri Gate side with the Yellow Line and Airport Line metro stations in New Delhi, including the multi-level parking side, across Bhavbhuti Marg through multiple entries and exit points.

In the presence of senior authorities, Delhi Metro Rail Corporation (DMRC) Managing Director Mangu Singh inspected the Skywalk’s finishing work on Thursday. They claim that the Skywalk will provide seamless connectivity and help streamline traffic flow on the Ajmeri Gate side of the railway station.

It stated, ”The skywalk has been provided with six escalators along with facilities such as CCTV surveillance cameras, toilets, ticketing counter, signage and a DMX controlled autonomous lighting system.”

The Skywalk, reminiscent of Jantar Mantar and coated in Agra stone, features an integrated escalator and stairs. According to the statement, the main bridge and arms branching to the entry or exits, escalators, and underground line are around 242 metres long.

The installation of this unique Skywalk in a busy centre was a tremendous engineering challenge, officials noted, especially given the disruptions caused by the COVID-19 pandemic.

The structure had to be built 3 metres above a fully operating underground metro station with heavy traffic on Bhavbhuti Marg. They added that the bridge had to be connected to two pre-existing building structures at the far ends to ensure minimal disruption to people, infrastructure, and other neighbouring buildings.