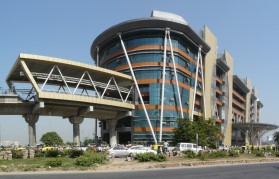 Gurgaon: The movement to extend the Metro rail network to old Gurgaon has got a fresh impetus, with the Haryana government roping in Delhi Metro Rail Corporation (DMRC) to conduct a feasibility study for the proposed route.

Additional chief secretary of town and country planning department, P Raghvendra Rao, told TOI on Wednesday that the state government has written to DMRC for conducting the feasibility study and it will start the work at the earliest.

“We have decided to take the help of DMRC for the proposed Metro route, which will connect old Gurgaon with new Gurgaon,” he said.

“On the basis of the feasibility report, we will take a call on the extension of the Metro network to the old city. We will also decided whether to engage some other agency for execution of the proposal or continue with DMRC, after getting the report,” he added.

Earlier the state government had invited quotations for conducting a feasibility study, following which three companies – DIMTS, UMTC and RITES – had come forward. DMRC had not submitted any quotation on the ground that they do not want to compete with other consultancy organisation for taking up the work.

According to a response to an RTI query, filed by activist Aseem Takyar, DMRC has expressed its desire to work only on mutually agreed terms and condition.