The station is planned with Multi-Modal Integration. The station’s entry/exit is integrated with Shivaji Nagar Railway station, PMPL & MSRTC bus depots, and the Hinjewadi metro line.

The Façade of the station will depict the prestigious heritage of Shri. Chhatrapati Shivaji Maharaj era- fort, which will align with the station’s name, Shivaji Nagar Metro Station.

The Pedestrian subway network connects the old Mumbai-Pune Highway at Akashwani (AIR) Pune &amp; Shivaji Nagar railway station. The two subways are proposed to increase the reach of the metro station. One subway leads towards Shivaji Nagar Railway station and another to interchange entry/egress at Dr Kapote Junction.

The road and traffic junctions will be redesigned at Shivaji Nagar with a modern look.

The underground stretch is part of Corridor-1 and starts from Range Hill Depot towards
Swargate. There are a total of Five Underground Stations planned, namely Shivaji Nagar,
Civil Court, Budhwar Peth, Mandai, and Swargate. 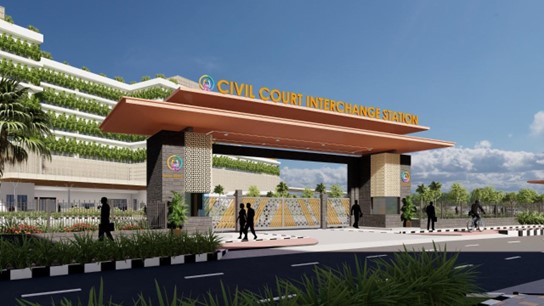 The Civil Court gate is designed as a focal point to direct commuters to the stations.
Conceptually it is a grand entry, and architecturally it is a modern contextual design depicting the grandness of the station. The design element has been taken from the station, i.e., using Basalt stone and GRC Jali for the gate design.

The Gate is designed as a focal point for future property development. The design is a
contemporary modern with space above.