This second-phase project to be unique in several ways

This second phase project is unique in several ways
The Metro Rail proposed by the Hyderabad airport to link Raidurg with the Shamshabad International Airport of more than 30.7 km will be high speed and the trains will be able to reach speeds of up to 100 km / h to reach the destination in 20 minutes. the whole range of displacements in the twin cities.

This is the second phase of the metro rail project that, in a certain sense, will be unique in several aspects compared to the first phase of the 72 km metro railway under construction along the three corridors of the capital.

Although they are capable of moving up to 80 kmph, subway trains usually have a range of up to 35 kmph. The airport subway or ‘Airport Express’, however, is going to be a super fast suburban train with limited stops between Raidurg, the interchange station and the airport. “The technology for the airport subway is different from that of the metro in the heart of the city, but less complicated with trains capable of speeds of 135 km / h. 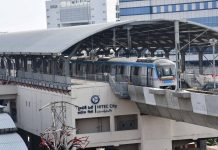