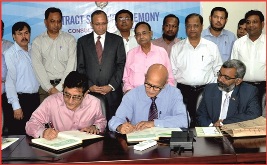 In a power point presentation, the HMR Managing Director N V S Reddy explained the challenges in the construction of mega urban infrastructure projects in countries like India and Bangladesh.

Reddy informed the delegation that HMR is being executed not as a simple mass transportation system but as an urban redesign project, and highlighted key features such as integration with other modes of transport, running of feeder bus services, creation of pedestrian facilities and introduction of bicycle stations etc.

L&T Metro Rail Hyderabad is developing the 72-km elevated metro rail project which will have three corridors and 66 stations.