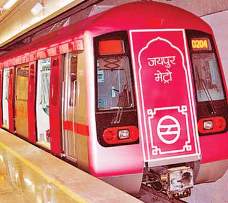 Jaipur: As per the latest Comptroller and Auditor and General of India (CAG) report, Jaipur Metro Rail Corporation’s (JMRC) claim of rain harvesting was found misleading. The metro body claims to have built a Rain Water Harvesting (RWH) structure along with ducts on 9.25 corridors between Mansarovar and Chandpole.

This claim however was found to be misleading by the CAG. JMRC had claimed to conserve rain water via RWH plant. As per reports the construction work of 255 (RHW) pits was part of main construction work via ducts in the Jaipur project itself.

Reports point out that only 29 RWH were built by Delhi Metro Rail Corporation (DMRC) till August 2017. Furthermore, these pits are not made as per approved designs and drawings.

Ironically, these 29 structures were not operational even after operationalisation of phase- IA.

As per sources JMRC was continuously following it up with DMRC to rectify the RWHs. Yet no response came from DRMC nor did they initiate any action. The Government of Rajasthan took note of the issue and stated that all remaining work to be carried out by JMRC or JDA.

When the project was initiated, Jaipur Metro has assured that they will provide an area of one lakh square meters of recharge collection. This number was huge and ambitious itself. With the structure not coming on time, the state failed to tap the opportunity to store rain water in plenty as the average pattern of rainfall is 32 mm per hour in the city.

CAG report also points out that the effluent water treatment (EWT) constructed at a cost of Rs 60 lakh never become functional. This plant was constructed to treat wastewater before it was let out in Mansarovar depot.

JMRC pinning the blame on DMRC said that the that pipe connection to outlet of the plant to dispose/utilise the treated water is awaiting with the DMRC leading to non-usage of plant.

Interestingly, JMRC never raised the issue with DMRC during the meeting to discuss leftover works in phase IA a meeting held in October 2016.