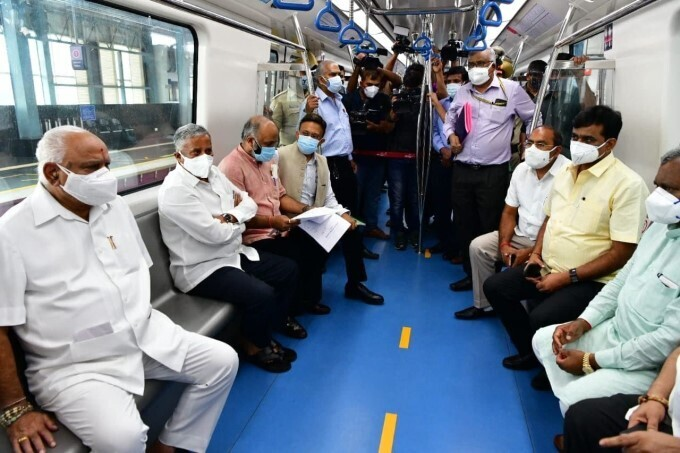 BENGALURU (Metro Rail News): Karnataka Chief Minister BS Yediyurappa recently inspected Mysuru Road-Kengeri section under Phase-2 of Bangalore Metro and said that the metro train services on the given section would open to the public from July this year.

While speaking to reporters after inspection of the section, CM Yediyurappa said, “The Reach-2 Extension Line under Phase-2 of the project on Mysuru Road up to Kengeri is almost completed and it will open for passengers from July.”

CM Yediyurappa also informed that this is an extension to the operational East-West Corridor on the Purple Line of length 18.1 km and this metro line extension will help people connect and travel faster.

The contract for this section of Purple Line western extension is awarded in two parts. Reach 2A section of 3.94 km from Mysuru Road to Pattanagere was awarded to IL&FS Company for four stations at INR 327 crore and Reach 2B from Pattanagere to Challaghatta of 4.86 km to Soma Enterprise at INR 332 crore while Alstom has bag the contract for supply of electrification and signaling works.

According to Metro officials, the maximum fare for travelling from Byappanahalli to Kengeri would be INR 56 and Kengeri to Silk Institute would be INR 60, which is the longest stretch. Once operational, this section will reduce the travel journey time between Mysuru Road and Kengeri to 15 minutes and with expected daily ridership of 75,000 passengers on this section. This will be the second line under Phase-2 to become operational after the 6.29 km long stretch from Yelachenahalli to Silk Institute became operational on 14 January 2021.