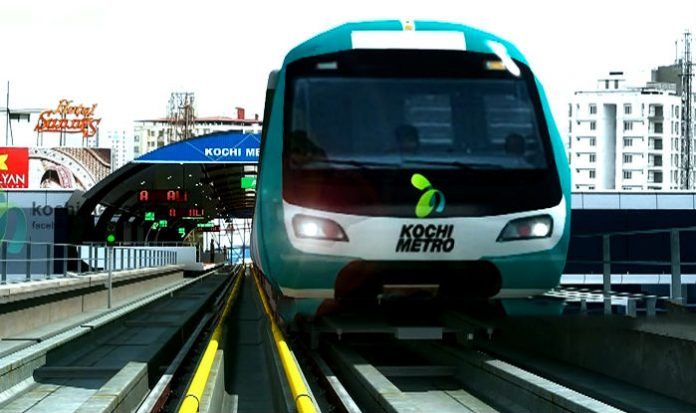 KOCHI (Metro Rail News): The Kochi Metro has completed two years of successful operations on Monday. Kochi metro has affected a consequential shift in the city’s public transport system. The metro service from Aluva was commissioned on June 17, 2017, and the service was only till Palarivattom. The metro’s services were extended to Maharaja’s College.

India's first Metro service to offer a gender neutral work environment. Feeding Pods and E-auto feeder services. On our second birthday, we have many first-of-its-kind achievements to be proud of. And of course, our 2.8+ million passengers who made this journey truly incredible. pic.twitter.com/3i5mZ4gnnR

The Kochi Metro also had several firsts to its credit in the two years of its operations. Kochi Metro credit include feeding pods on Metro stations, E- auto feeder service, solar power plants in its yard and station roof, plastic bottle recyclers and rainwater harvesting.

The Metro authorities are planning to further extend the services to Petta by March next year. As the services are scheduled to be extended till Thykoodam by this August. Once the service reaches Petta, Kochi metro phase 1 will be completed.

The purpose of Kochi metro will be fully served only if the services offer connection to Tripunithura and the areas like Kakkanad said buy the stakeholders of city’s development.

V K Vijayakumar Chief Investment Strategist, Geojit Financial Services said that “Kochi Metro is yet to break even. The passenger volume traffic has not witnessed a spurt. It has partly succeeded in decongesting the roads from Aluva to Kochi. The Kerala Model of economic development – high quality of life even with low per capita income – had attracted global attention for its inclusivity and women’s empowerment. Keeping in tune with this Kerala model of inclusion, Kochi Metro has made a laudable inclusive initiative by employing many transgender (TG) persons.”