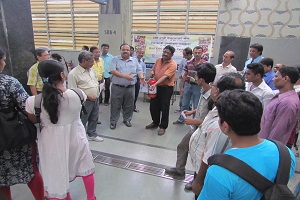 Kolkata: As a part of Passenger and Customer Facilitation Fortnight – “Railyatri/Upbhokta Pakhwada”– 26.05.2015 to 09.06.2015, in Indian Railways, a lot of passenger friendly measures have been taken in Metro Railway, Kolkata.

On June 4, 2015, a Special Safety & Awareness Campaign was organized at Kavi Subhash Metro Station for the safety of the commuters and awareness leaflets were also distributed among the passengers to create awareness o­n safety. o­n this occasion, an awareness campaign was carried out by Metro employees about the usage of Safety Devices.

A Special Health Check-up Camp for the Staff & Officers of Metro Railway was also organized o­n that day at Metro Rail Bhavan where about 250 employees participated.