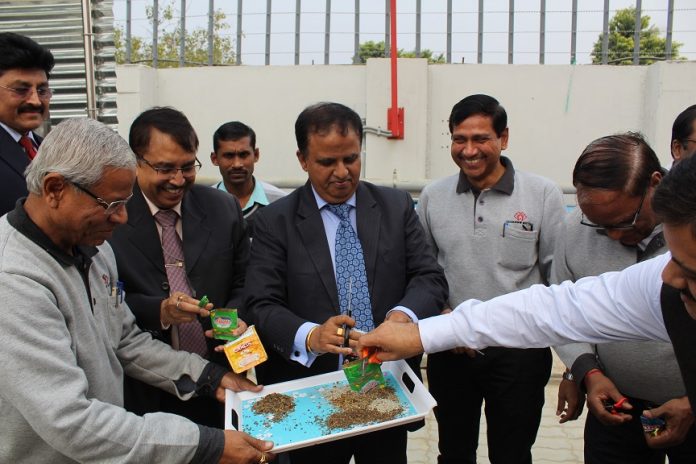 “It is yet another step ahead taken by LMRC towards maintaining a cleaner and greener Uttar Pradesh. This machine will decompose the waste and will produce good quality organic compost which can be used in the Depot for the vegetation, plants and greenery for their optimal growth, “the Managing Director said while inaugurating its working.

This fully automatic waste composting machine will be fed with the Depot canteen kitchen waste, depot garden waste and tobacco products collected from commuters while frisking them at Metro stations. In turn, the machine will give good quality of organic compost after eight days of decomposition cycle.

Automatic waste composting machine works on the principle of anaerobic respiration. Small microorganism decomposes the waste into smaller fragments under optimum temperature and moisture conditions. Continuous mixing of waste happens inside the machine, which gives good quality of organic compost after its eight day decomposition period.

The Transport Nagar Metro Depot houses a variety of plants and trees. Large quantity of dry leaf waste gets accumulated inside the Depot on a regular basis. These will now be fed into the machine to get compost out of it. Similarly, Depot canteen also generates a good amount of kitchen waste which be added to this compost machine. Different waste streams can now be targeted for composting them in an efficient, economical and eco-friendly manner inside the Depot.

With the State Government’s “No Tobacco Policy” in place, Lucknow Metro has been recovering good quantity of tobacco and tobacco related products from the commuters on daily basis. This machine will now dispose and make compost out these banned products. It has a capacity of managing 100 kg of waste products at a time which can be converted into compost in a cyclic way.