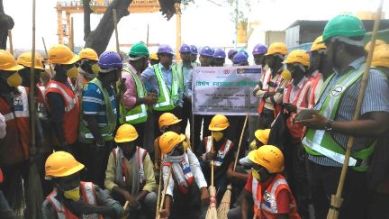 Lucknow: Lucknow Metro Rail Corporation (LMRC) is undertaking environment campaign at its project sites from 1st June, 2015 to 5th June, 2015. Under this campaign, special housekeeping and environmental awareness activities are being undertaken to train site personnel on the ways of keeping the environment clean and green.

The Managing Director of LMRC, Shri Kumar Keshav, personally made a visit to the Metro construction sites to see the overall preparedness and conduct of various activities planned there. M/s Larsen & Toubro Ltd. arranged a mass level housekeeping campaign wherein special instructions were given on ways to spruce up the environment.

The workers working at project sites are being given training on segregation of waste at the construction sites. In addition, they are also being trained on environmental awareness issues.

Simultaneously, the Lucknow Metro is also imparting regular training on safety to all its workers and engineers. LMRC is ensuring that they receive training on the safe use of fall arrestor, erection of pier cap and u-girder, ergonomical hazards and precautions, gas cutting and wielding work, scaffold erection and others.

According to a Senior Official of LMRC, total 187 induction training programmes on Safety and Environmental Awareness have been imparted to 6158 inductees.