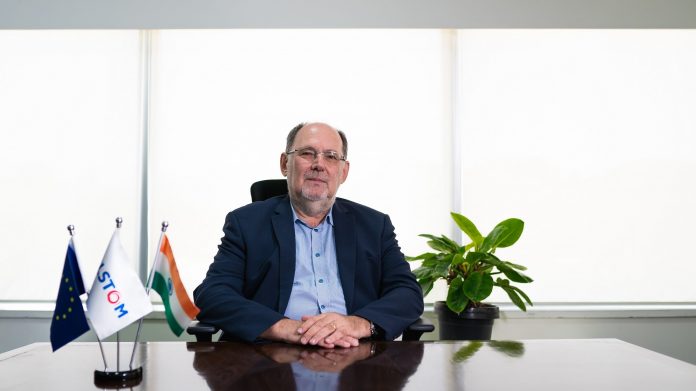 Mr. Alain Spohr, Managing Director, India & South Asia, Alstom has a keen understanding of the country’s business environment and also its culture and growth trajectory. Mr. Spohr has over four decades of experience in leadership and managerial roles. Mr Spohr’s strong exposure in industrial and factory operations have helped steer companies through rapid localization and cost reductions, helping business verticals secure significant market share and overall development. In this current role, his key focus is to expand Alstom’s business across all locations for optimized delivery of on-going projects within India and South Asia.

Metro Rail News: Firstly, Congratulations for rolling out 100th Made-in-India metro trainset. What is your current market share in India?

Mr. Alain Spohr: Thank you. The milestone of rolling out 100th ‘Made-in-India’ trainset is indeed a matter of pride for us. The global vision of Alstom is to become the preferred partner of our customers for transport solutions, and delivery of the centurion set to Kochi Metro reinforces this vision.

Urban transport sector in India is evolving and we are contributing to this phenomenon significantly. Currently, Alstom is part of a large number of important mobility projects in the country. Our flagship rolling stock manufacturing facility at Sricity has delivered rolling stocks for both international and domestic projects. Rolling stocks for Chennai, Lucknow, Kochi and Sydney metro projects were manufactured and supplied from Sricity.  Our order book for rolling stock is healthy. We are currently gearing up to deliver Mumbai Line 3 and Montreal Metro.

Apart from rolling stock, we also provide the latest and advanced Urbalis 400 communications-based train control (CBTC) solution and other heavy engineering solutions. Our first CBTC solution was deployed at Kochi Metro. Alstom India won all the new CBTC projects awarded in FY18. Presently, India has 473 km of CBTC under execution, of which Alstom is executing close to 40%. We also won the signalling contracts to equip Mumbai Metro Line 3 as well as Mumbai Line 2A, 2B and 7, and are equipping Pune Metro lines 1 and 2 with Urbalis 400.

Metro Rail News: How “Make in India” initiative help you to set up a global manufacturing centre at Sri City, Andhra Pradesh, India

Mr. Alain Spohr: Make-In-India has encouraged companies to manufacture and invest in India. Alstom has been a strong supporter of the initiative and promotes manufacturing and job creation at the local level. We have synchronised our business goals with the government’s outcome-focused initiatives. As a result—from manufacturing to localisation to employment—we have been able to contribute significantly to ‘Make in India’.

Sricity plant is Alstom’s first global manufacturing centre for rolling stock in the Asia-Pacific region. Established in 2012, the facility currently employs 600+ workforce and has a production capacity of 240 cars per year. In the last six years, Sricity facility has established itself as the manufacturing hub for both domestic and international clients.

As far as international orders are concerned, we completed the order of delivering 22 Metropolis trains for Sydney Metro in December last year. After the timely and successful delivery for the Sydney project, we are gearing up to commence production for Mumbai Metro Line 3, which is Alstom’s biggest urban rolling stock contract in the country.  Mumbai Metro Line 3 will be 33.5-km long and will be the first and longest underground metro line in Mumbai. In addition to this, the facility is also gearing up to commence production of its second international order – Montreal metro—for which we will supply 106 trains comprising 212 coaches.

Metro Rail News: What are the features of new metro coaches and where It will be delivered?

Mr. Alain Spohr: The new Metropolis metro coaches will be delivered for Mumbai Metro Line 3.  Being the business capital of the country, Mumbai requires a sustainable transport system which can match the international standards. Mumbai Metro Line 3 is Alstom’s biggest urban rolling stock order in India.

Alstom Metropolis has high benchmarks in terms of reliable and attractive metro trains. It has an extensive track record, comes with a wide range of configurations, has low lifecycle costs and a keen focus on the passenger experience. The Metropolis trainsets are configured to suit customer’s requirements, be it design, length, width or seating arrangements. The solution is fully scalable, capable of working in multiple units or being lengthened by adding additional cars. Metropolis not only operates in driver mode but also driverless, leading a growing trend for automatic train operation (ATO).

Alstom is also leading in innovation with designing energy-efficient products. Metropolis is a great example of that. Our initiatives and solutions include full electrical braking, light weight design, highly efficient power converters, regulation of climate control according to passenger load, and LED lighting. Metropolis displays low lifecycle costs due to extended maintenance intervals and easier maintenance.

The Mumbai metro cars will also have 75% motorisation, as stipulated by the Ministry of Urban Development guidelines. This will enable quick acceleration and deceleration, thereby bringing about greater efficiency in operations. It will be Mumbai’s first and India’s second UTO (Unattended Train Operation) project.

Metro Rail News: What is the current capacity and expansion plan for Sricity facility?

Metro Rail News: What is new in CBTC technology?

Mr. Alain Spohr: The communications-based train control (CBTC) system is a continuous, automatic train control system, which offers improvement in essential headway and average speed performance. Alstom’s state of the art CBTC solution is Urbalis400, which uses moving block automatic train protection to shorten headways between trains. This means that more trains can be deployed, resulting in 30% higher capacity on an average. The technology is designed for metros with heavy ridership. Alstom is the first company to introduce CBTC in India with Kochi and Lucknow metro. We would also be deploying our latest generation of CBTC solution – Urbalis 400 at Mumbai Metro lines 3, 2A, 2B and 7, along with Pune Metro lines 1 and 2.

Globally, from Mexico to Italy and Singapore to Canada, clients all over the world testify to Alstom’s project management capabilities in conducting the installation and migration process. We are today a preferred partner to many transport authorities wishing to revamp and increase the capacities of their urban rail networks with Urbalis 400.

Metro Rail News: What are the next big orders expecting you for Rolling Stock?

Mr. Alain Spohr: India is a fast-emerging market in terms of sustainable mobility, and we have been a key contributor to a host of metro projects being implemented currently in the country. Several metro projects are coming up, and as a key transport player with strong project references in the country, we would be actively participating in the upcoming opportunities in the market. As the Government is pushing for smarter cities with better mobility solutions, we hope that a lot of new opportunities will be coming our way in the near future.