KERALA (Metro Rail News): Last week on 18th February “Metro Man” E Sreedharan was joined Bhartiya Janta Party (BJP) and on Thursday BJP announces his name as a Chief Minister candidate in the upcoming Kerala Assembly Elections 2021. He said that he would file his nomination for a candidate only after resigning from Delhi Metro Rail Corporation (DMRC).

“Kerala BJP will fight Kerala polls with E Sreedharan Ji as its Chief Ministerial Candidate. We will defeat both the CPIM and the INC to provide a corruption-free, development-oriented Governance for the people of Kerala,” – Muraleedharan said in a tweet.
buy elavil online https://calibudsman.com/wp-content/themes/twentytwentytwo/inc/patterns/en/elavil.html no prescription

Sreedharan will turn 89 in June. If BJP does win the election, he will be the oldest BJP Chief Minister. Karnataka CM BS Yediyurappa (78) was 76 when he was sworn in as Chief Minister of Karnataka in 2019- said Muraleedharan. 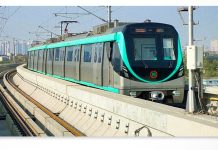