MAHARASHTRA, INDIA (Metro Rail News): MMRDA announced that they are set to procure 10 more rakes for its monorail project, which is expected to improve the frequency of trains and the ridership. The first rake of the train is likely to come by the end of 2022. All the rakes will be made in India.

The MMRDA has awarded the tender to Medha Servo Drives Pvt. Ltd to procure ten monorail rakes as per the decision taken in a meeting in September 2021, said MMRDA officials. The cost of this project is approximately Rs. 590 crores. Medha is buying the new trains in a bid to run the Monorail efficiently and improve its connectivity.

“We are trying to revive the Monorail and improvement of its route’s connectivity with metro rail and run it efficiently. Once all the new monorail rakes, which will be completely indigenous, become operational, it will reduce the headway and the ridership is expected to increase,” said MMRDA officials.

Accordingly to the report given by MMRDA, in July 2018, it was decided to buy ten new rakes with four coaches each. In March 2019, the first tender was floated for the same and during which it was observed that the Chinese companies were demanding several changes in terms and conditions. At the same time, due to COVID-19 and the pandemic, the Central government had instructed to promote the Make in India and Aatmanirbhar Bharat Abhiyan. As a result, the old tenders were cancelled, and new ones floated to increase the participation of Indian companies in August 2020.

After that three Indian companies, i.e., BHEL, Titagarh and Medha that shown interest in the bids and out of which the MMRDA shortlisted Medha as the lowest bidder. 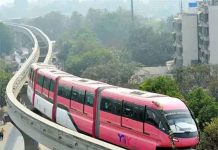 Mumbai Monorail’s fleet soon to get one more rake