NEW DELHI, INDIA (Metro Rail News): In August 2021, the average number of commuters journeys on the Delhi Metro has increased to around 23.36 lakhs following a relaxation in guidelines that permitted a 100 per cent seating capacity inside coaches.

The number of people penalised for not following the covid-19 protocol also spiked, with over 13,000 commuters being fined by the flying squads.

Due to Covid-19 lockdown

In the past 18 months, services of DMRC were stopped at least twice, with commuter’s operations first suspended on 22nd March 2020 due to the covid-19 induced nationwide lockdown.

Services resumed on 07th September 2020 before being stopped again in May 2021 due to the second wave of the pandemic.

According to relevant guidelines, travel was permitted with alternate seating and standing with social distancing in place. In addition, following a phased resumption of services, the DMRC had also deployed flying squads across the network to ensure relevant covid-19 protocols.

“The flying squads were deployed across the network to randomly check inside trains for any violations and counsel people to refrain from doing so for their own and everyone’s safety,” said DMRC officials.

An amount of Rs. 200 was imposed on those commuters who do not follow given norms and regulations, said DMRC officials.
buy viagra sublingual online no prescription

The highest ridership that the Delhi Metro saw since the first lockdown was in March 2021, when over 26.81 lakh commuters’ journeys were recorded. According to data provided by the DMRC, the number of fines imposed in March 2021 was 7,058.

Between September 2020 and March 2021, the Delhi Metro network saw a gradual increase in commuters journeys recorded, from around 12.25 lakhs in October 2020 to 25.55 lakhs commuters’ journeys in February 2021.

However, with the second wave’s onset and before services were suspended on 10th May 2021, the Delhi Metro network saw around 14.07 lakhs commuters’ journeys in April. Despite the dip in the number of commuters journeys, approximately 8,735 commuters were fined by the flying squads in April 2021 compared to the 2,823 fines imposed in February 2021, when the commuters’ journeys were comparatively higher.

In the Delhi Metro, the total spans over approximately 391 KMs, currently standing travel continues to be prohibited. However, according to the government guidelines, 100 per cent seating capacity is permitted, and commuters can be seated in every seat. 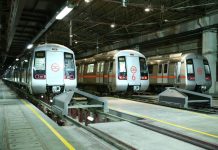 MoHUA to consider many MRTS project in Delhi-NCR