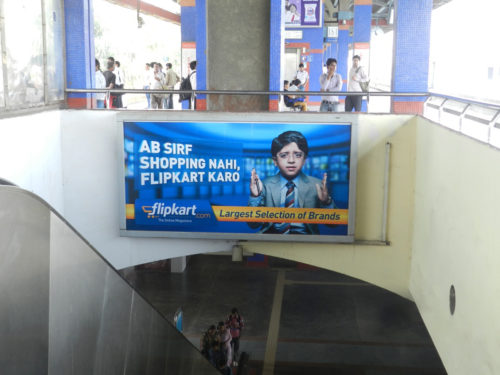 Noida: Metro stations along the 29-km Noida-Greater Noida route will soon be identified with names of companies and their brands. Officials of the Noida Metro Rail Company (NMRC) said that a policy for the auctioning rights to name the stations was finalized on Monday in a board meeting, convened by NMRC managing director, Santosh Yadav.

According to NMRC officials, the prerequisites for the scheme have been worked out and would be launched once the 21 stations along the corridor are handed over to NMRC by the Delhi Metro Rail Corporation (DMRC). “The rights will be auctioned through bidding process for a period of five years, which will be extensible. Bids will be evaluated by a high-level evaluation committee,” said Yadav. “Station branding is successful internationally and we will adopt it as soon as the Metro stations are handed over to us,” he said. Yadav further said that non-fare revenue is crucial for the success of mass transit systems with fares kept deliberately cheap under populist pressure. “This scheme will help us generate revenue,” he said.

The selected licensee will have exclusive semi-naming rights at the selected Metro station area and at the concourse level. The licensee will suffix their brand name with the name of the station. In addition, the licensee shall also be granted advertisement rights at the station. The company will get an advertisement space of 500 sqm at the station to advertise its brand besides several selected activities for branding. The colour scheme within the station will also be determined by the company to go with its brands.

The Board also finalized a policy for providing connectivity through skywalks and foot over bridges at Metro stations. “Property owners who want to obtain direct connectivity to stations via FOBs and skywalks will have to pay a one-time amount upfront,” explained P D Upadhyay, general manager (finance), NMRC. “The design for these advertisements will be approved by a proposal evaluation committee,” he said.

A third policy approved on Monday included procurement of goods and services by NMRC. “Procurement, outsourcing, bidding norms, consultant appointment, etc will be governed by this policy,” said Yadav.
Speaking on the proposed fare slab for the city bus service between Noida and Greater Noida, the Board said that the fares be further evaluated. “The fare structure of local conveyance along the proposed bus routes needs to be studied in detail to evaluate if we can further reduce costs of commuting,” said Yadav. “We will rework the costs and finalize the fares within a week,” he added.
Officials further told TOI that a website for Noida’s Metro Company was also under process. It will be governed by gov.in and is being developed by UPESCO, officials said.
Daily Updates from Metro & Railway