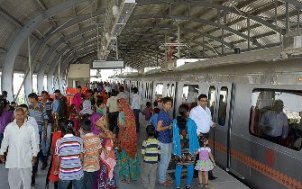 The New Okhla Industrial Development Authority (Noida) has approved the detailed project reports (DPR) for the two routes. The first line will be 11-km long and run between Okhla bird sanctuary and Sector 142 parallel to the Noida Expressway. The second line will cover a distance of 15 km from Sector 71 to Greater Noida’s Knowledge Park-V.

The DPRs, prepared by Delhi Metro Rail Corporation (DMRC), were approved by the authority on Friday during a board meeting.

“Now we will study the two DPRs and send the same for UP government’s approval. Work on the two routes is expected to begin next year. The routes are part of our mega project in which we want to build a Metro loop to spread connectivity around Noida and Greater Noida,” said Rama Raman, chief executive officer of Noida and Greater Noida.

The Noida Metro Rail Corporation (NMRC) has also decided to explore the feasibility of a tram rail project on a 15-km stretch between Botanical Garden Metro station and sector 144.

The Noida and Greater Noida authorities on Friday finalised a comprehensive mobility plan (CMP) for the two cities to address public transport woes. Last year, the authorities had approved a proposal to prepare a CMP and now the detailed mobility project has been approved to be implemented further. Officials said they have finalised 27 routes 390 buses to resolve commuting woes.