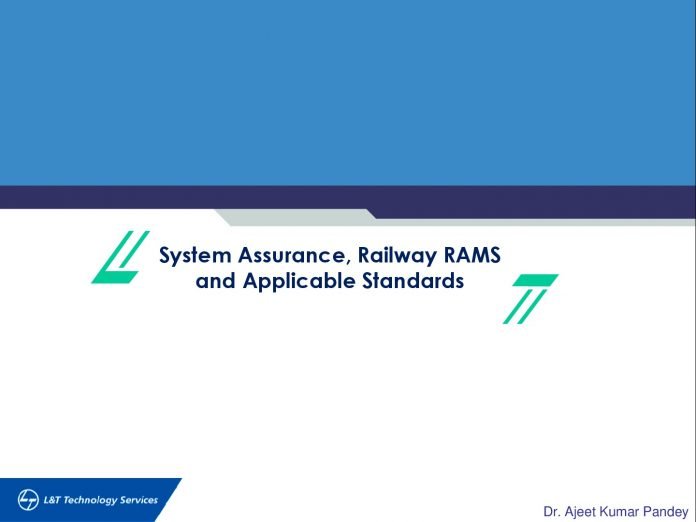 In the present scenario of global competition RAMS ( Reliability, Availability, Maintainability and Safety) Engineering plays a vital role in design, maintenance, safety/security and management of engineering systems. Reliability is considered one of the most important performance assessment index for most of the industrial products, processes and services. It focuses on systematic study and analysis of failures and developing methods for eliminating them or at least minimizing their occurrence with minimum damage to system and environment. It is truly interdisciplinary in nature since failures are not limited to any particular types of engineering systems, processes and services. It is in effect a specialization sought by all engineering practitioners and researchers.

In Railways, the RAMS  Engineering and Management can be applied to all Railway Systems and plays an important role at different stages of product life cycle starting from conceptual design, manufacturing, operation, maintenance, replacements to disposal. It systematically designs, studies failure process, finds out the root causes, suggests improvements and quantifies the product performance over a period of its mission time in contrast to the conventional engineering practices, which mainly focus on design of systems for certain specific functional requirements.

Reliability, Availability, Maintainability and Safety (RAMS)have developed as a new Engineering discipline in the recent past. This has evolved and grown in mostly Aviation and Defence Laboratories because the performance in those fields had to be totally dependable and utmost safe. Metro-railways in urban areas need similar high standard of reliability and safety.  European Commission has issued EN 50126-1999 , updated in the year 2017 for specifying and demonstrating RAMS targets achievement for Railway applications.

Compliance to international Standards is demanded today for every railway systems; for signaling it is compulsory. There are many globally accepted standards around the world such as IEC, EN, AREMA, along with some country specific standards. We are currently in the process of converting (harmonizing) European railways standards into international standards, and one of those is the RAMS standard.