KANPUR, INDIA (Metro Rail News): Prime Minister Narendra Modi today inaugurates the entire developed part of the Kanpur Metro Rail Project. The launch comes ahead of the Council elections in Uttar Pradesh. UP CM Yogi Adityanath and the Ministry of MoHUA Hardeep Singh Puri was also part of this inauguration.

The completed 9-km extended Kanpur Metro Rail Project from IIT Kanpur to Moti Jheel. The total length of the project is 32 km, and it is built at an estimated cost. Rs. 11,000 crores.

Addressing the gathering on this auspicious occasion, Hon’ble Prime Minister, Shri Narendra Modi said, “The government is committed to bring the much needed change in Uttar Pradesh. It has already inaugurated many infrastructure projects in the state and the onset of metro services in Kanpur has been one of them in the league. Today Uttar Pradesh is amongst the fastest developing states in India having maximum number of operational metros.
buy viagra professional online no prescription
Metro is becoming the lifeline of cities in the country. In the past few years, the government has extended this network to several cities and even more cities will be connected in the time to come”.

In addition to the Metro Rail Project, the Premier will also launch the Bina-Panki Multi-Product Pipeline Project. According to the PMO, the 356-kilometer-long pipeline project has an estimated capacity of 3.45 million metric tonnes per year.

However, PM Modi attended the 54th Indian Institute of Technology (IIT) conference in Kanpur and congratulated the graduating students.

Shri Hardeep Singh Puri, Union Minister of Housing and Urban Affairs said “This double engine government is fulfilling its commitment of providing a world class mode of transport to the people. We stand by our resolution of providing a comfortable and smart mode of transport to the people and Kanpur Metro in this line is just a one step – we have taken in this direction.” In the coming days Gorakhpur, Meerut, Agra, Prayagraj, and Varanasi will also witness the upsurge of similar infrastructural development. The cities will soon be blessed with a world class mobility system.”

Earlier, it was decided to set a date for the inauguration on December 25 on the birthday of the prime minister, Atal Bihari Vajpayee. Then, however, new dates were set, keeping in mind that the PM could also attend the IIT-K conference and the opening ceremony.

Let’s have a look at the few points related to Kanpur Metro: 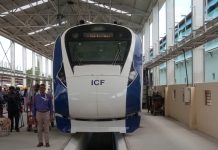