Geotechnical engineers performed a geotechnical investigation to obtain information on the physical properties of the soil and foundations for proposed structures. The Haryana Cabinet approved the Detailed Project Report (DPR) of the corridor earlier this year. The corridor will allow people to travel from Delhi to Alwar via Gurugram and Rewari in less than two hours once the project completed

The base construction cost of the corridor is estimated to be Rs 24,975 crore and construction work is expected to be complete in 5 years time excluding one year of pre-construction activities. It will be funded by the central government (20%), concerned state governments (20%) and bilateral/multilateral funding agencies (60%).

The corridor will be elevated for about 71 km, the remaining 35 km will be underground, mostly in Delhi & Gurugram. 11 station on the corridor will be elevated while five will be constructed underground. It will converge with other RRTS corridors in Sarai Kale Khan and will offer interoperable, facilitating commuters’ movement from one corridor to another without having to change trains.

RRTS trains with a design speed of 180 Kmph will be available at a frequency of every 5-10 minutes. The infrastructure is being designed for up to nine coaches train. These trains will be air-conditioned with transverse seating and overhead luggage space. The daily ridership on this corridor is estimated to be 8.5 Lakhs in 2025. 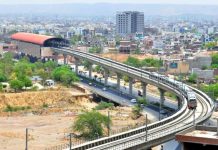