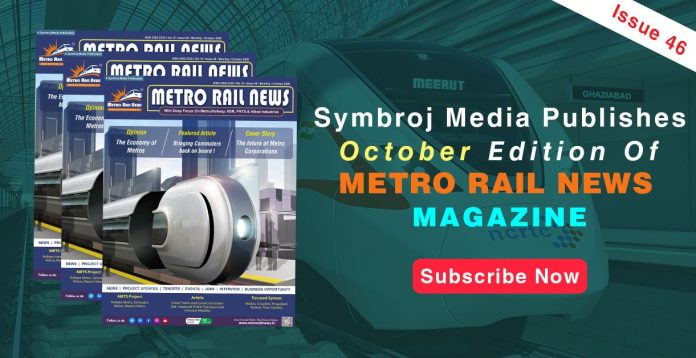 NEW DELHI (Metro Rail News): The Symbroj Media Pvt. Ltd. today published October Edition of its esteemed publication of “Metro Rail News” Magazine. The magazine has been published under the guidance of its Managing Editor, Mr Narendra Shah. The Magazine has been progressing very fast even during the pandemic and it has added significant readership to the magazine during the lockdown period.

The magazine is published every month both in print as well as digital mode. The digital version, as well as the print one of October issue, was launched by Mr Narendra Shah, the Managing Editor of the company and Mrs Priyanka Sahu, the Director of Business Development at the company. The October issue of the magazine discusses different aspects of the Metro sector ranging from the problems it is suffering from today along with the possibilities ahead. The magazine discusses the different things like Economy of Metros along with Future of the Metro Corporations in this edition.

Exclusive interviews of Mr Alain Spohr, Managing Director of Alstom India and Alkesh Kumar Sharma, Managing Director of Kochi Metro Rail Limited have been published in this edition of the magazine. On this occasion, the Managing Director of the Magazine, Mr Narendra Shah said, ” We have been progressing very fast with a rapid pace during these challenging times. Our team has been working hard and we are reaching out to our readers with new things every month. We are planning to bring a few more publications soon in the near future”.

The Metro Rail News brings News to you through different channels including a Web Portal and the Magazine which is printed in hard copy & published through online mode as well. The Metro Rail News platform is a venture of New Delhi based company named Symbroj Media Pvt Ltd. The other ventures of Symbroj group include Symbroj Solar, Inno Metro, Metro Rail Association and Smart Cities News.