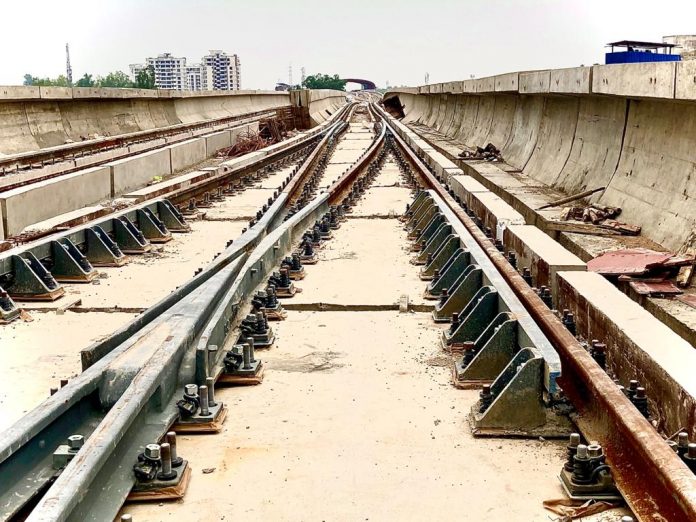 Metro track laying work was started on 11th May from IIT Metro station and so far has reached till SPM Metro Station. Metro track is laid down by joining segments of rail of 18 meters each through rail welding machine and a long track is made by joining these segments and then laid down on the track.

For the given distance from IIT to SPM station, UPMRC has laid down the track of 3.5 km including Up-line and Down-line. For the Priority Corridor from IIT to Motijheel, about 18 km long track is to be laid including both the lines (9 km each for Up-line & Down-line).

It is important to mention that ballastless tracks are being laid down for the mainline while ballasted tracks are being laid down for the metro depot. The track work is also progressing at rapid pace in the metro depot which is being constructed at Government Polytechnic. So far, 65% of the track work in the depot is completed. A total of 18 lines are to be laid in the depot out of which 12 lines are already being laid.

According to the Managing Director of UPMRC, Kumar Keshav, “The track work is progressing at a good pace at the mainline as well as the depot in Kanpur. Signalling, telecom and electrical systems are also being installed. We are moving forward towards the target of trial run on the Priority Corridor in November with full positivity.”