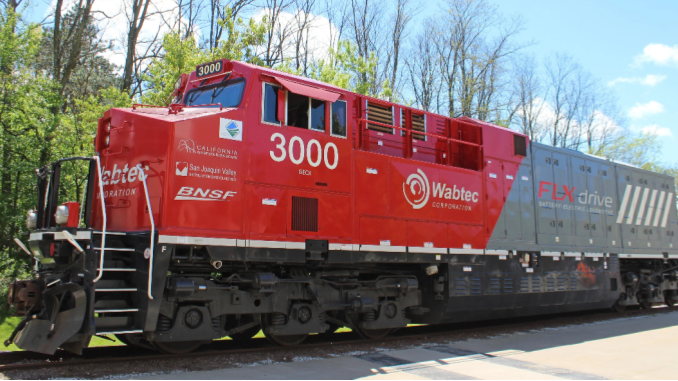 Wabtec Corporation (NYSE: WAB) revealed today a rail industry first: the FLXdrive battery-electric locomotive reduced fuel consumption and greenhouse gas emissions by more than 11% on average over an entire train. That is the equivalent of saving over 6,200 gallons of diesel fuel and reducing nearly 69 tonnes of CO2 emissions.

These results are the culmination of a three-month pilot with BNSF Railway, the largest railroad in the United States, during which the FLXdrive, the world’s first 100% battery locomotive, was tested in revenue operation through more than 13,320 miles of hilly terrain in San Joaquin Valley, California – a region surrounded by mountains.

“The FLXdrive battery-electric locomotive is a watershed moment for freight rail, accelerating the industry’s transition to low- to zero-emission locomotives,” said Eric Gebhardt, Chief Technology Officer at Wabtec. “It strengthens the rail industry’s status as the most effective and environmentally friendly mode of transportation.

Wabtec, BNSF, and the San Joaquin Valley Air Pollution Control District received a $22.6 million grant from the California Air Resource Board for the California pilot programme. The pilot’s 430,000-pound FLXdrive has 18,000 lithium-ion battery cells. The battery locomotive was charged at the rail yard and recharged while travelling via regenerative braking. The Trip Optimizer system, an intelligent cruise control system designed by artificial intelligence to adapt to any twist and gradient of the track in the most energy-efficient way possible, manages the total train energy flow and delivery.

The aim of Wabtec is to create the next generation of zero-emission locomotives. The corporation has a direct roadmap to using batteries, hydrogen internal combustion engines, and hydrogen fuel cells to power new locomotives and repower existing locomotives. It is part of Wabtec’s strategy for the rail sector to play a vital role in the development of a renewable energy economy, reducing global carbon emissions by up to 300 tonnes per year.

Pune Metro to start operation from this year