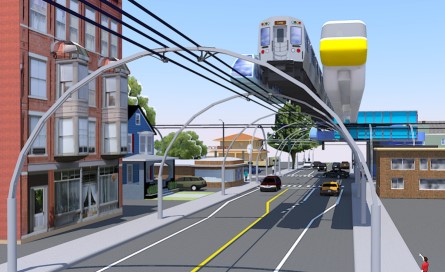 Gurugram: Haryana has taken the lead to set up a pilot corridor for the “Caterpillar Train”, a new concept for urban mass-transit solution designed by an Indian Railway officer which won a global award at the MIT in the United States earlier this year. Chief Minister Manohar Lal Khattar has instructed his office to coordinate with local authorities in Gurgaon and figure out a way forward, especially in terms of space, for the pilot corridor.

Ashwani Upadhyaya (43), the railway officer who co-invented the Caterpillar Train concept, along with Emil Jacob — both PhD scholars at MIT — met Khattar on December 8 in Delhi.

“The CM liked the idea. He instructed officers to take it forward, so local authorities have been informed. We are looking at a ‘Proof of Concept’ at this stage,” said Rakesh Gupta, additional private secretary to the CM.

The busy area between HUDA City Centre and Sushant Lok is one of the areas they have zeroed in on, although he talked about an area near the Ambience Mall with Khattar.

“I have been asked to take help from the state’s GIS department to select a suitable corridor. Police were of the view that the corridor may be best suited for a stretch that has transport demand but does not have proper bus service yet. But they said we were free to decide a stretch of our choice after proper scouting,” said Upadhyaya.

Jacob also arrived in India to help scout for a place. The estimate is about $3 million for a “stripped down” pilot system and about $20 million for a full-fledged automated system, he said. The Caterpillar Train, or

C-Train, envisages a citywide network of lightweight, elevated train coaches running at about 100 kmph on a track supported by poles bent into arches.